Bryson DeChambeau: Why he rejected interview requests and almost QUIT the game

"I just felt like, 'I don't need any of this. Why? Why put myself though all this torture?'" 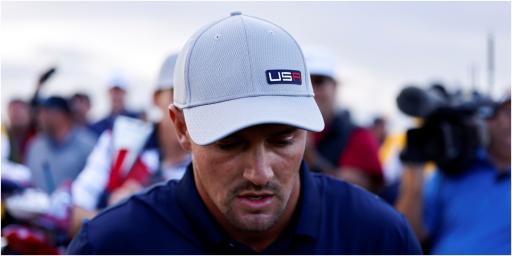 Bryson DeChambeau has revealed how he almost quit the game of golf early last year.

In an interview with the New York Post, the 28-year-old spoke about how he struggled with attacks on his character.

DeChambeau is playing the Hero World Challenge in Albany, Bahamas this week in one of his first events after a post Ryder Cup vacation.

He was pictured throwing around a football with Tiger Woods, hitting some bombs and also went low on Friday afternoon.

It doesn't look like he will have enough to win the title this week as Collin Morikawa looks like he has an unsurmountable lead.

"There was a point in time — I’m not kidding — where I just felt like I wanted to leave the game.

"I just felt like, 'I don't need any of this. Why? Why put myself though all this torture?'"

DeChambeau most recently played in a match against Brooks Koepka and lost 4&3.

He is playing a new Bridgestone ball this week and soon will have a new driver in the bag which he has teased on his social media pages.

He trails Morikawa by eight shots and will need his Ryder Cup team mate to come unstuck on his final round.

DeChambeau, like everyone, appeared to be mentally affected by the COVID-19 pandemic.

Some headlines that emerged during his war of words with Koepka led to him turning down multiple interview requests.

"I got hit pretty hard," he said. "That's why I kind of walked away, because people were damaging [my] character. It was all the stuff that was going on in social media. I was like, 'I really don't need this. I can walk away and be totally fine the rest of my life, be happy and go and hit the long ball and call it a day.'"

"I couldn't let down the people that were around me, the people that truly believed in me," he said. "So, I said, 'No Bryson, you can do this for a long time.' I had great people around me, and things changed for me. I got back to a place where I felt like I could continue."

His match with Koepka didn't prove to be as big a ratings hit as perhaps golf's money men would have liked.

The build-up seemed to last a very long time, but DeChambeau was adamant he was only ever going to play if it was for charity.

He told the publication he donated $100,000 of his own money to the Shriners Hospital for Children.

They also raised more than $3 million.

"At the end of the day, we raised a lot of money for charity. The only way I was going to play a match against him was if it was for charity. We raised over $3 million and I put over $100,000 of my own money toward Shriners Hospital, St. Jude, APGA and Feeding America.

"I'm more proud of that fact than if I would have beat Brooks. Like, I really don't care. It's 12 holes and I'm ranked higher than him in the world. He has more majors than me. Great. I respect what he's done. Full disclosure: I've got great respect for him."

The rivalry between the two seemed to begin with an issue Koepka had with slow play.

Koepka was quoted getting frustrated with fellow players taking a long time to hit each shot.

Then from there, it spiraled and nearly every other day there were more headlines.

I love my driver, Koepka famously said after DeChambeau said his "sucked" then later clarified he was talking about his driving - not the club.

"It's not necessarily great for the game of golf. We want to focus on competing and having a rivalry. It's not a boxing match. He incited it. Look, I understand his play. I understand the PIP aspect of it. I see the whole picture, and it's OK. I am not worried about it.

"I will keep producing content and entertainment value for the public, because that's who I am. I'm an entertainer. Am I always going to be the perfect human being? No."

"When it's all said and done, I want to be known for growing the game. I know this life is going to pass by really quickly and in 10 or 15 years I'm going to be better than I am now. But then it's going to be gone. Hopefully, I can provide young kids information."