Tiger Woods comeback: This theory proves we could SOON be getting a big update

We have no reason to doubt Woods will make it back to the PGA Tour but this fan's observation means we can be even more hopeful. 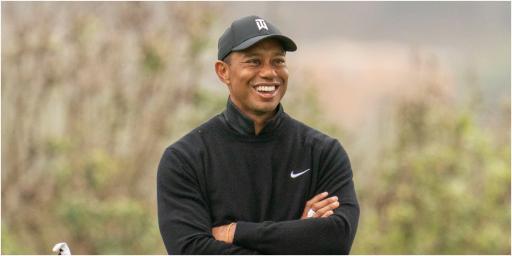 Tiger Woods may not be playing at the forthcoming Hero World Challenge in the Bahamas where he is the tournament host.

But it is not out of the realms of possibility that in three weeks we could get our biggest Woods update yet.

The big cat has not played since he crashed his car in February earlier this year when he was speeding from one event to another.

He had to be extracted from his luxury SUV and has since provided little to no updates as to the status of his recovery.

It's been agony according to comments he made to GolfDigest, but recently there has been huge improvement.

Judging by the fact he is now able to walk without crutches it's widely expected Woods, 45, will be there in person in Albany.

No doubt he will asked about his condition and in all likelihood he'll probably give us little or nothing.

Why risk saying that you will make a comeback only for it to all come crashing down?

It's not the Woods way.

But this Tiger Woods account pointed out something interesting:

At the Presidents Cup in late September 2017, Tiger had already posted the chipping video but at the presser said he didn’t know what his future would hold because he didn’t have a swing yet. 3 weeks later, a stinger video was posted to his Twitter account.

Before Woods made his last comeback after his spinal fusion back surgery, Woods posted a video hitting little chip shots.

Then three weeks later he showed a clip hitting a stinger.

The rest was history and Woods came back to the top of the golf world, winning the Masters for the fifth time in 2019.

Then he equalled Sam Snead's record with his 82nd win on the PGA Tour.

Woods is walking now so no doubt he could probably clip a few away in his Florida estate.

Sources close to Woods have claimed that he has "resumed limited golf activity".

He's done it once, why can't he do it again?

Fingers crossed there will be a Woods update soon.

.@TigerWoods' swing is looking this week at Winged Foot. pic.twitter.com/v6uq9sVQM8

Woods announced the field of the Hero World Challenge on his social meda pages.

It is as follows:

The tournament will take place from 29 November to 5 December.