Jon Rahm would love to one day play golf with his son Kepa - just like Tiger Woods did with Charlie at the PNC Championship. 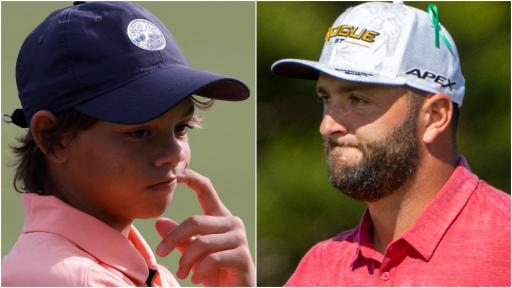 Tiger Woods' son Charlie Woods is much a better golfer at the age of 12 than Jon Rahm was at the same stage of his career, admits the World No.1.

Rahm, who finished second behind new PGA Tour record winner Cameron Smith at the Tournament of Champions on Sunday, admits he would also love to one day experience playing golf with his own son Kepa just as the Woods' did at the PNC Championship recently.

The Spaniard was asked at Kapalua whether or not he watched the father-son tournament at the end of 2021 while he was enjoying his off-season with his family.

"Of course I watched, I'm a golf nut," said Rahm with a smile.

"Tiger Woods' son Charlie has got a lot of talent, certainly a lot more than I did at the age of 12.

"If he keeps working hard, which I'm sure he will, I wouldn't doubt one second we'll see him one day maybe sitting here."

Rahm added: "I would like to experience in the future with my son Kepa the sensations Tiger felt playing alongside him [at the PNC Championship].

Kepa was born just days before the 2021 Masters.

Team Woods ended up finishing two shots behind John Daly and his son John Daly II at the 2021 PNC Championship in the third week of December, a tournament that marked Tiger Woods' first competition since his horror car crash in Los Angeles at the end of February.

While an impressive and optimistic week for Woods, John Cook, a close friend of Woods, believes we might not see the 15-time major champion play again in competition until the 2022 PNC Championship at the end of December.

Woods is said to be targeting The Open at St Andrews in July as a potential comeback tournament, but much will depend on how he continues to progress.

NEXT PAGE: JON RAHM AND CAMERON SMITH DIVIDE OPINION OVER THE PACE OF PLAY ON THE PGA TOUR LAST WEEK