Jon Rahm and Cam Smith were taking their time at the Tournament of Champions, with the Aussie taking more than two minutes over a 60-yard shot. 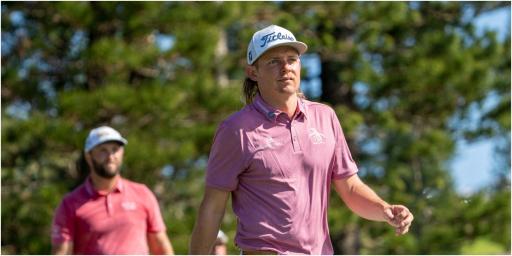 Cam Smith reportedly took more than two minutes to play a shot in the third round of the Tournament of Champions.

Of course, big bucks on the PGA Tour were on the line and the world number one was hunting him down in Kapalua.

Hardly your monthly stableford where only a couple of quid and the bragging rights are on the line.

That being said, was the time he took over the ball too long, or is it just par for the course these days?

It was rightly pointed out that Smith and Jon Rahm had to wait to tee off on the next hole.

But some have suggested it's more about the principle of pace of play.

Golf stat guy Lou Stagner pointed all of this out on his Twitter profile.

"If we are worried about slow play, stuff like that needs to stop," he writes.

In the third round on the 16th hole Smith & Rahm both had approach shots of ~60 yards.

They both walked up to the green to get a better look.

Smith played 1st and took just under 2 minutes to hit the shot.

If we are worried about slow play, stuff like that needs to stop.

I usually always agree with your takes but I’m out on this one.

Last group in a limited field event on the weekend and it was also a twosome. That isn’t what slows them down.

The slow play comes on the greens at the PGA tour level.

If we tolerate it now, they’ll do it in every event.

Juniors and amateurs do this kind of stuff cuz they see the pros do it.

The guy trying to win the B flight club champ does it.

What you permit, you promote.

No. Don’t allow them to do it on one shot because they don’t do them on others.

If they did that on every shot, it would be a 9 hour round.

Pace of play in golf is out of hand.

My point was it isn’t just limited to the final group on Sunday. It happens everywhere.

If everyone takes 2 minutes per shot it’s so far behind 4 our pace. It would be closer to 8 than 4.

The players on the PGA Tour are now without their precious green-reading books.

So you would expect their rounds to be a shade quicker.

Instead, players have been given tour-approved yardage books.

They have been told they are not allowed to transfer notes from old books and are being expected to honour that.

But some PGA Tour caddies have suggested that it's likely there will be some playing fast and loose with the rules.

It also has to be said that even though players were taking their time, it translated over to the scoring.

No wind meant scoring was absolutely bananas and Smith set a new PGA Tour record with the lowest score ever recorded.