Tiger Woods to Steve Williams: "You f---ing clown, only you!" 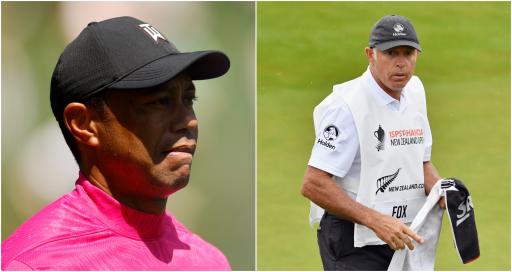 Tiger Woods' former caddie Steve Williams has spoken about the time he accidentally dropped the big cat's 9-iron in a lake during the Ryder Cup.

More: Tiger Woods is not happy with Nike | Opinion

The year was 2006 and it was a very good season from the then 31-year-old. He had won eight times that included two majors.

Woods was part of the Ryder Cup side that year that took place at the K Club in Ireland. The United States side got trounced 18.5 to 9.5.

For the Europeans, it was best remembered for Darren Clarke's superb play despite the fact he had lost his wife Heather to cancer only months earlier.

Woods also played well and returned three points from five of his matches.

But there was one absolutely hilarious moment that involved his 9-iron going missing.

On the Chasing Majors podcast, his former looper described: "So it's a par-3, a green that has all water to the front of it and to the right of it.

Okay then. So what happened next?

Tiger Woods at the 2022 Masters with his caddie Joe LaCava

Williams decided to try and keep it quiet hoping that Woods would not need to use it.

He continued: "We go to the next hole, I believe he was playing with Jim Furyk, Tiger's going to hit his second shot, and it's the bloody 9-iron.

Williams said Woods responded by saying: "You f—–g clown. Only you."

Apparently the pair laughed about it hysterically for ages.