Bryson DeChambeau may be hitting crazy clubhead and ball speed numbers on the PGA Tour in 2021, but Tiger Woods was doing similar 17 years ago! 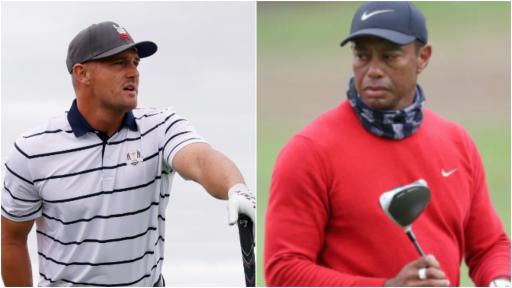 Bryson DeChambeau's club speed and ball speed is unbelievable. There's no denying that. But Tiger Woods was doing exactly the same in 2004.

Tiger never did that. Impressive.

Bryson, the PGA Tour's biggest hitter, who averages a clubhead speed of 133mph and a ball speed of 192mph, was hitting drives well over 400 yards on a number of ocassions both at the Ryder Cup and in the World Long Drive Championship.

Lee Elder: How speeding ALMOST prevented him from watching Tiger Woods win in 97
Justin Thomas is working on "UNCOMFORTABLE" shots ahead of Hero World Challenge

DeChambeau could "only" manage 391 yards in the Final and his good friend Kyle Berkshire ended up retaining his title with a 422-yard bomb.

Okay, Bryson was also putting up 148mph clubhead speed before the Ryder Cup as he warmed up for the Long Drive competition.

Imagine the scene if Bryson goes at it like this on the first tee at the Ryder Cup pic.twitter.com/7NFMHEUYXK

While Bryson's club speed and ball speed numbers are incredibly impressive, and unlikely won't be caught anytime soon on the PGA Tour, they are not too dissimilar to what former World No.1 Tiger Woods was producing some 17 years ago.

And with remarkably different driver technology, too.

Had no idea this existed until just now: Flightscope numbers from a Tiger drive during a 2004 exhibition round

Cruising at Bryson speeds almost 20 years before it was cool (and had more in the tank if he wanted it, too) pic.twitter.com/fAoAPcy4zD

Golf journalist Luke Kerr Dineen posted a tweet earlier this week of some of Tiger's Flightscope stats from an exhibition round in 2004.

Woods' club speed number stood at 129mph, so just 4mph shy of DeChambeau, and a ball speed of 185mph, some 7mph short.

DeChambeau has eight PGA Tour titles to his name, which includes one major at the 2020 US Open, and he currently ranks seventh in the world.

NEXT PAGE: HOW TO DRIVE THE BALL LIKE TIGER WOODS