Tony Finau: What's in the bag of the three-time PGA Tour winner?

Tony Finau pounced on a huge collapse by Scott Piercy on the back nine at TPC Twin Cities to win the 3M Open, coming from five shots behind to win by three. 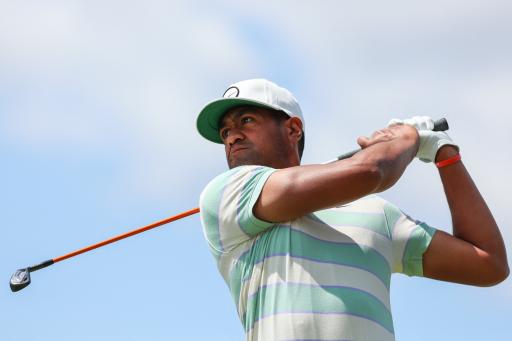 Tony Finau discovered you need a whole lot of luck to win on the PGA Tour on Sunday afternoon as he picked up his third career victory at the 3M Open.

Not that the 32-year-old didn't know this already. 10 second-place finishes tell us that Finau hasn't experienced much luck in the final stretch since his debut season on tour in 2015.

But when Scott Piercy found the water on the 14th hole at TPC Twin Cities, this was the twist of fate that Finau needed to get into contention. It was heartbreak for Piercy who also bogeyed the 15th hole.

Having led by five shots at one stage, he was now two shots behind Finau who played impeccably on the back nine, recording birdies on holes 11, 14, 15 and 16.

The man from Salt Lake City carded his second 67 of the week to reach 17-under-par, three shots ahead of Sungjae Im and Emiliano Grillo. It was great to see all of his family present in Minnesota to enjoy the victory with him.

Related: PGA Tour: How much did each player win at the 3M Open?

The first win with @TonyFinauGolf's family there to share in the celebration pic.twitter.com/K6N7Me6tDR

Piercy, winless on the PGA Tour since 2018, went on to card a 5-over-par 76 to finish in tied fourth place. Winning professional golf tournaments is incredibly hard and Finau knows this more than anyone.

Next Page: WATCH: Darren Clarke had the funniest reaction to winning his second Claret Jug