Sir Nick Faldo called Tony Finau's remarkable victory at the beginning of the CBS broadcast when a win seemed improbable. 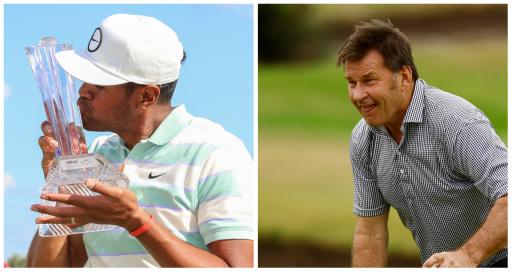 Sir Nick Faldo was labelled "Nickstradamus" after he called Tony Finau's remarkable win ahead of the final round of the 3M Open.

It seemed ludicrous as Scott Piercy, the 43-year-old PGA Tour journeyman, started the day with a four-stroke lead at TPC Twin Cities.

But Piercy endured an almighty collapse on the back nine in Maine, Minnesota and Finau, 32, overturned what at one time was a five-stroke deficit.

Piercy had an absolute nightmare at the par-4 14th when he recorded a devasting triple bogey. Watch that here.

The American dropped five shots on his back nine as he struggled to a final round of 76 after previously shooting three rounds in the 60s.

Sir Nick Faldo @NickFaldo006 called the PGA 3M Open today, 3 hrs before it ended. Tony Finau was 5 stroke behind at the time and won it by 3! What are your lottery numbers mate?!

Faldo has announced his retirement from calling the action on CBS. He began the role in 2007 and will hang it up at the conclusion of the FedEx Cup Playoffs.

Faldo has also rubbished suggestions that he could commentate for the rival golf tour LIV Golf.

Astonishingly, David Feherty was last week announced as the latest LIV Golf signee on what is likely a ludicrous contract.

The legendary on-course commentator, famed for his hilarious exchanges with Tiger Woods, will make his debut at the third LIV event at Trump National in Bedminster, New Jersey.

There are rumblings that Gary McCord, the former CBS analyst, is also in talks with the Saudi-backed series, along with the former legendary NBA player Charles Barkley.

Barkley claimed that everyone in major sports has been involved in sportswashing.

His decision has not yet been announced.

Next page: Was Justin Rose taking a dig at the LIV Golf players?