Steve Doerfler was diagnosed with multiple sclerosis in 2012, the same disease Graeme McDowell's mother developed when he was in his 20's. 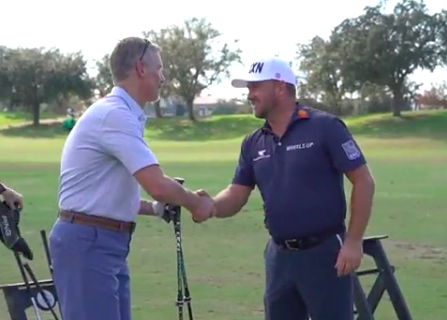 Jared Doerfler and his father Steve were at Pebble Beach in 2010, watching Graeme McDowell do battle with many other superstars of the PGA Tour at the US Open.

On the 15th hole in the third round, McDowell tugged his shot left and shouted 'FORE'. This is where Jared and Steve were stood and Jared was able to react and hear the call.

But Steve fell to the floor and both men admit that this was a point where they felt something may be up. Steve was diagnosed with multiple sclerosis in 2012, this is a lifelong condition that affects the brain and nerves that currently can't be cured.

This is the same condition that the eventual US Open champion's mother Marian was also diagnosed with when he was just in his 20's, which is why McDowell wanted to meet Jared and Steve.

"The moment of being that close to Graeme and seeing how loose he was, in terms of being in the mix. It was the third round and how he just went about his business and he hit a great second shot on 15. He went on to win which was terrific," Steve said.

Eleven years ago, a tee shot from @Graeme_McDowell led to a diagnosis for one fan in the gallery.

Steve is certainly an inspiration for many who face adversity. Under the guidance of McDowell, Steve hit some balls on the driving range and it is fair to say, he is still an extremely impressive golfer.

The father and son duo reminisced about seeing McDowell at the US Open 11 years ago. This was the Northern Irishman's first major championship victory, fighting off the likes of Tiger Woods and Ernie Els.

This heartwarming video is an example of how and why golf can appeal to people from so many different walks of life. As Steve says, he is unable to run or cycle but golf has allowed him to remain active.

RELATED: QUIZ: CAN YOU NAME EVERY PGA TOUR CHAMPION OF 2021?

McDowell told Steve about his own mother's experience with multiple sclerosis and how she has bravely battled the condition.

It is fantastic to see this type of bond being created between fans and players and also the raising of awareness by the PGA Tour.

NEXT PAGE: THE MASTERS: REIGNING CHAMPION HIDEKI MATSUYAMA TO RECEIVE HIS OFFICIAL INVITE