PGA Tour pro after seeing rookie Tiger Woods: "What the F was that?"

Tiger Woods has continually shocked the world with his wins and comebacks. But this story from his rookie season is hilarious. 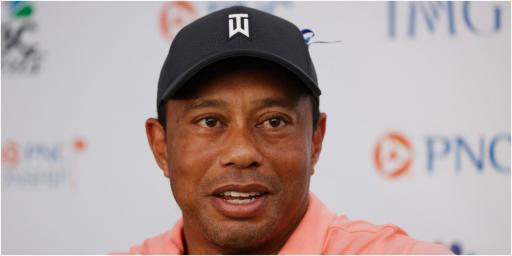 It is almost as if it is a rite of passage to tell the world your Tiger Woods story if you have one.

There are thousands of stories out there that involve Woods, 46, and peoples' encounters with him.

Such is the draw of the man he is written about every day and even though he's not currently playing the golf world waits with baited breath for another update.

Woods joined the PGA Tour in 1996 with the infamous line: "Well I guess hello world." The rest is history. A year later he was a Masters champion.

Related: How did Tiger Woods explain his split with Elin Nordegren to his kids?

Of course, we all knew he was destined for greatness long before that. He had won multiple US amateur titles and also was on television when he was a toddler.

And yet, he still had the shock factor about him. One of those people who recently described their first encounter with Woods was John Maginnes.

The long time pro was playing with him in 1996 at the BC Open, which was Woods' fourth career start.

Maginnes recently joined the GOLF Subpar Podcast to describe the moment on the third hole - a par-5 - which still shocks him to this day.

Woods' tee shot went into the trees but got a favourable kick out into the fairway. Maginnes had about 240 yards to the front of the green.

He explained how he thought he could roll his 3-wood to the front of the dance floor. Woods was approximately 30 yards behind him.

"Tiger pulls out an iron because he has 270 to the front; he's clearly laying up. Makes sense.

"I'm standing 10 feet away from the hardest golf swing I've ever seen in my life, the loudest contact to a balata golf ball I've ever heard.

"And by this point, Tiger's already walked 40 yards. As soon as he made contact he knew. It landed about four steps onto the front of the green and trickled to the back fringe.

"And I looked at Fluff (Woods' first caddie) and I want to be very clear to all the listeners, I was not asking for advice when I said, 'Fluff, what the F was that?"

At the time, Maginnes was averaging 268 off the tee.

Well, the boy always was a bit special.