Former World No.1 Jon Rahm made a par in interesting fashion during the second round of the FedEx St. Jude Championship on the PGA Tour at TPC Southwind. 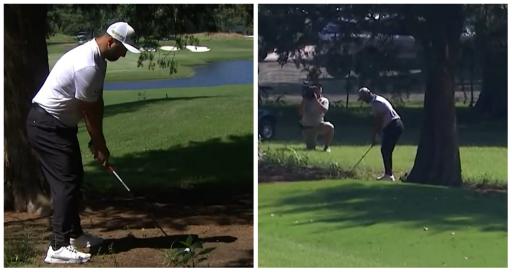 Life is good for Jon Rahm at the moment.

He and wife Kelley Cahill have welcomed the birth of their second baby boy and now the Spaniard is playing in the FedEx Cup Playoffs battling it out for his share of the $75million on offer in the postseason on the PGA Tour.

It's fair to say though, that this has not been the sparkling season we expected to see from the former World No. 1.

Not that it has been bad. But Rahm has only won once this season, at the Mexico Open at Vidanta Vallarta in April before the PGA Championship.

But during Friday's second round of the FedEx St. Jude Championship at TPC Southwind, 27-year-old Rahm showed us exactly what propelled him to the top of the world rankings when he saved par in incredible fashion.

Rahm pushed his tee shot right on the third hole and found himself stuck behind a tree in front of a water hazard. Was what happened next deliberate?

It's reasonable to suggest that this was a unique way of saving par. Most people would conclude that what happened was an absolute fluke after he pitched onto the green and navigated two putts for a five.

But after his round, he told the media "no comment" with a cheeky look on his face when asked if it was deliberate.

However, he is currently projected to stay well inside the top 30 players in the standings to make it to the Tour Championship in two weeks' time.

Only the top 70 players in the FedEx Cup will make it through to the BMW Championship.

Next page: What Jon Rahm told Kelley Cahill will make you laugh