Cameron Smith and Scottie Scheffler reportedly saw the funny side of their "incident" at the first FedEx Cup Playoffs event which broke the Internet. 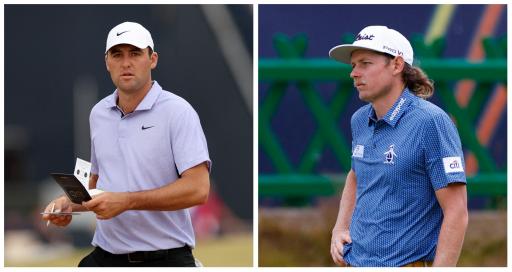 Scottie Scheffler and Cameron Smith reportedly were thinking of hatching a plan to further fan the flames on social media after their "incident".

To catch you up, Scheffler walked in front of Smith when he was lining up a putt during the first round of the FedEx St. Jude Championship.

Folks online began to theorize that this was 100 per cent a shot fired by the Masters champion over Smith's reported Saudi-backed future.

Of course, there was more than likely absolutely nothing in it. Scheffler was perhaps just a tad frustrated with his start. I mean, he did this to his putter.

Anyway, a hole later at TPC Southwind, Smith holed out for an eagle and high-fived the 25-year-old leading the FedEx Cup standings.

If there was bad blood there, it was short-lived. But apparently, when the pair got back into the clubhouse they found the incident utterly hilarious.

So much so that they were thinking of re-creating what happened at a later point.

Golf Channel commentator Steve Sands said during Friday's second round broadcast: "They were telling us on the range that they were inside the clubhouse joking about it, maybe re-enacting it today just to stoke a flame on social media

"Scottie said he didn't mean anything by it at all. Cam knew it. And also Scottie said listen, 'I was off to such a bad start, I was just kind of out of my head space a little bit and didn't realize what I was doing."

Unfortunately, the moment that broke the golf Internet was not recreated.

The pair were both grinding it out on opposite ends of the leader board. Smith moved himself into contention whereas Scheffler missed the cut, alongside Rory McIlroy.

Next page: Why haven't the PGA Tour suspended Cam Smith?