Jordan Spieth had a moment to forget during Friday's second round of The Valero Texas Open on the PGA Tour. 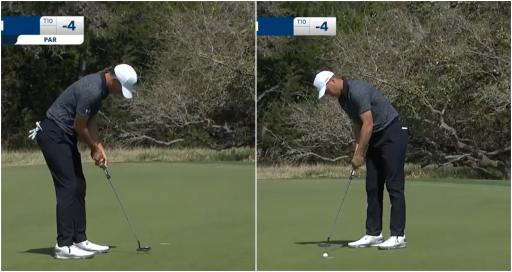 It is no secret Jordan Spieth is struggling on the greens of late...but this is something else.

Related: Jordan Spieth is "half the player he used to be" says Brandel Chamblee

We're not sure what exactly to file this under. Sloppiness? A mis-read? A pure brain hiccup? Whatever it was, it wasn't pretty.

Spieth was playing the second round of The Valero Texas Open on the PGA Tour when this happened.

As the defending champion, he wanted to put in a good performance. Not least because it was the final tournament ahead of The Masters.

Spieth was playing the sixth hole at the Oaks Course at TPC San Antonio. It is a relatively straightforward par-4, measuring at 404 yards.

From there, he sent his second shot long and over the back of the green.

Spieth, 28, did the hard part and gave himself three feet for par. Then he had an absolute mare.

A few seconds later he walked off the green with a pretty grim double bogey. It's easily done for us amateurs but Jordan Spieth?!

This was gross. He didn't even appear to have too much of a reaction to what had just transpired. He just casually walks off the green.

Spieth went 72-70 for a 2-under total after 36 holes with the projected cut line at 1-under par with the afternoon wave coming in.

Earlier in the day, Hideki Matsuyama was forced to withdraw with a neck injury, casting doubt on his Masters defence next week.

Ian Poulter, too, missed out on a spot at the first major of the year.

That's probably how Spieth felt after he trudged off the green at the sixth hole.

Jordan Spieth now sits 1 shot inside the projected cutline @ValeroTXOpen with 2 holes remaining in his second round. pic.twitter.com/psPB4nHoDD