Brandel Chamblee has tried to work out what exactly is going on with Jordan Spieth's swing. 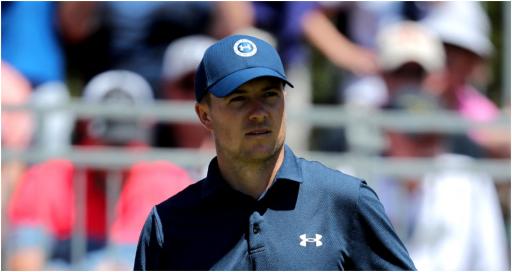 Brandel Chamblee says Jordan Spieth's new swing has dug him "out of a slump" but it has made him "half the player he used to be".

Related: What we can learn from Jordan Spieth's new pre-shot routine

Spieth is the defending champion at the Valero Texas Open at TPC San Antonio but found himself well off the early pace.

The Oaks Course was the scene of Spieth's return to the winner's circle last season after he had gone 83 events without a victory.

Ever since he pegged it up at the beginning of the season we have seen Spieth, 28, going through an interesting pre-shot routine.

The three-time major champion appears to be practising more of an "over the top" move trying to play a nice little fade.

That shot shape is extremely popular on the PGA Tour with the likes of Jon Rahm and Dustin Johnson favouring it for its consistency.

This all might be a little bit of a moot point. The statistics, by and large, point to Spieth being less than desirable on the greens.

Spieth shot a level par opening round at the Oaks Course as he sought to defend his title which was seven strokes off the lead.

He actually lost 1.9 strokes on the field in putting. Statistically, Tyrrell Hatton is the best putter on the PGA Tour so far this season.

Englishman Hatton has gained 1.168 strokes on the greens during 18 measured rounds. Brian Gay is second and Cameron Smith is third.

Spieth, at the time of writing, has lost -2.744 strokes on the field this season on the short stuff and sits in T142 in the stats. Not good.

At his best, Spieth is incredible with the putter. He will need to improve dramatically in that department as we head into the major season.

Chamblee posted this of Spieth's woes:

It’s hard to explain that move, other than by saying that it’s allowed him to dig his way out of a slump, to become roughly half the player he used to be.

If you want to thwart or hobble a genius athlete all one needs to do is getting them thinking about their action. https://t.co/b5zbi92ifN

Do you agree? Is Spieth now back in another slump or will he prove us all wrong with some impressive major performances this year?

Let us know on our social media channels.