Hideki Matsuyama was forced to withdraw from the Valero Texas Open on the PGA Tour during the second round. 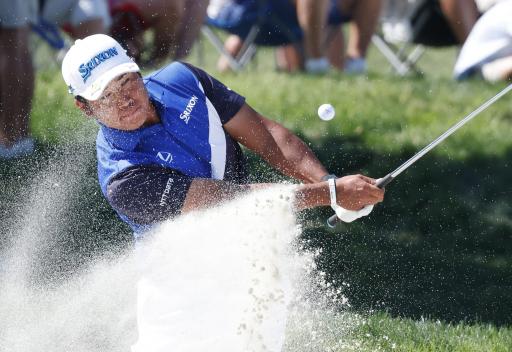 Hideki Matsuyama was forced to withdraw from the Valero Texas Open on the PGA Tour during the second round.

The Japanese golfer had been struggling with a back injury that meant he also had to withdraw from The Players in early March.

But it was a neck injury that caused him to leave TPC San Antonio early, according to the PGA Tour official communications team.

Matsuyama is due to defend The Masters next week and there will be fears in his camp he may face a race against time to be fit.

The 30-year-old became the first Japanese golfer to win The Masters last year which made him a hero in his homeland.

Hideki Matsuyama WD during round two of the Valero Texas Open with a neck injury.

And he followed up that victory with another win - his eighth PGA Tour win - at the Sony Open in Hawaii in January.

Scotland's Russell Knox had a one-shot lead after the first round in Texas, with Matsuyama nine shots off the pace after a 2-over-par 74.

Rory McIlroy was in the field as well as Bryson DeChambeau and defending champion Jordan Spieth.

At the time of writing the projected cut was 1-under par.

Matsuyama is currently ranked No. 12 in the world. He pulled out of the second round in Texas after playing nine holes.

He also opted out of playing the WGC Match Play earlier in the month which Scottie Scheffler won to became the new World No.1.