Wayne Player reveals fallout after his controversial ban from The Masters

Wayne Player was banned from attending The Masters by Augusta National after he attempted to advertise OnCore golf balls during the honorary starters ceremony in 2021. 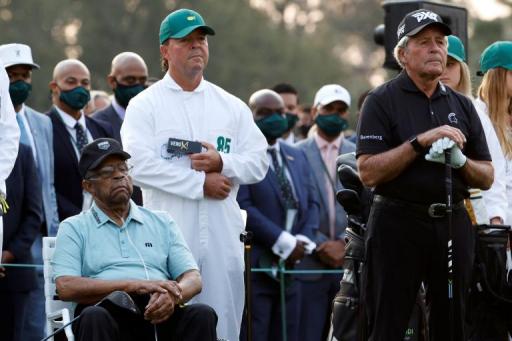 Wayne Player made such a mistake at The Masters in 2021 that even Jack Nicklaus asked him: "What are you thinking?" Now the son of the legendary Gary Player has revealed the fallout of the controversial moment.

In a chat with Golf Digest, Player opened up about his regret at attempting to advertise OnCore golf balls during a very special honorary starters moment at the 2021 tournament.

Regular ceremonial starter Gary Player and Jack Nicklaus were joined by Lee Elder last year before his death in November. Elder became the first African-American to play in The Masters in 1975 and he was a four-time winner on the PGA Tour.

During the ceremony, Player held up a box of OnCore golf balls during the broadcast and this brought on a barrage of criticism and upset from golf fans. He has now been banned from the premises by the club.

"Well, they say there’s no such thing as bad publicity. I found out that that’s not quite true," Player said.

"I had probably 50 texts after that, 40 of them said I'm a marketing genius, 10 were like, ‘What the hell were you thinking?’. It wasn’t premeditated, but it was a tacky thing.

"I don’t mind letting people know. To be completely transparent I think it is a cool story because you know, the National never really came out formally and said, ‘Oh, we're, you know, not allowing Wayne Player to come back to the Masters.’ They never ever said that to the media. That's just the way they do it. They don't say much.

"I understand why people took offence to it. Jack, the Golden Bear himself, told me, ‘What are you thinking?’ I said, ‘You know, Jack, you’re right.’ You have to be accountable when you mess up."

Player, 58, told Golf Digest that he thought people wanted to know what golf ball his nine-time major winning father played with while serving as his caddie.

Keith Blakely, the CEO of OnCore Golf has since reiterated that the company "had no knowledge of, nor did we encourage or endorse, Wayne’s attempt to bring attention to the OnCore golf balls."

Player apologised to Elder for interfering in what was a very special moment at Magnolia Lane and despite submitting an apology to Chairman Fred Ridley, his ban still stands.

"I've got Lee's cellphone number. I called and I said, ‘You know, Lee, I love you guys.’ You know, everyone said I was disrespectful for a special moment in time for Elder. I said I was sorry, and I didn’t mean to take up his special time," Player added.

"And he said, ‘Wayne, you know how much I love you. Right?’ It didn’t cross his mind. That’s important for people to know.

"It said thanks but no thanks. It said, you know, we appreciate you reaching out and apologizing, we accept your apology, but we are not changing our position, we are not going to allow you back. You ruined a special moment in the history of the game of golf."

Gary Player "stayed out of it" in Wayne's words and he didn't want to take sides. As much as he accepts the situation was his fault, Player is disappointed that he can't return to the site where his father won three Green Jackets.

"It’s one of their traditions to give champions’ families badges to the tournament. I was there for my dad’s wins. The place means a lot to me. Hopefully, this will all pass."