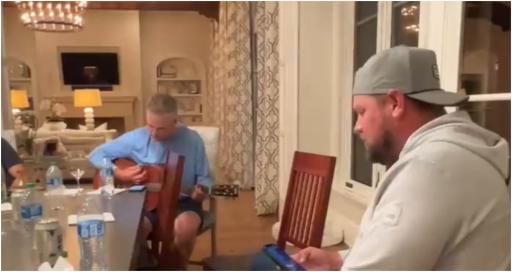 PGA Tour pro Kevin Streelman isn't the type of name your armchair golf fan might be aware of.

More: Jordan Spieth says his next run could be his best yet

But Streelman, 43, is a two-time PGA Tour winner. Those victories came a long time ago in 2013 and 2014 when he won the Tampa Bay Championship and the Travelers Championship.

It has been a mixed season so far for Streelman. He's enjoyed a top-10 finish at the Valspar Championship and fared well at The Honda Classic.

And it appears that apart from being handy with a golf club in his hand, he's also a keen musician.

During some down time he was filmed teaming up with a PGA Tour caddie Aaron Flener absolutely smashing a country song.

Flener doesn't actually work with Streelman. He is the bag man for JT Poston. But as the video teases us, Streelman bought the guitar and Flener bought the pipes.

Flener revealed his talents for singing at the Zurich Classic when he was filmed singing the walk out song for his player Poston and Stephan Jaeger.

The song of choice back then when the players came out to the first tee box was Callin Baton Rouge, by Garth Brooks.

Flener says on his social media profile that song is his karaoke special.

Check out the pipes on Flener as he sings a cover of "That Summer" as Streelman provides the backing music.

Again, this is a tune sung by Brooks.

I'm not too sure, but I think the duo absolutely smashed it. What do you think?

Next page: How good is Will Zalatoris? Just ask him