Justin Thomas goes into detail about his working relationship with Bones after claiming his second major. 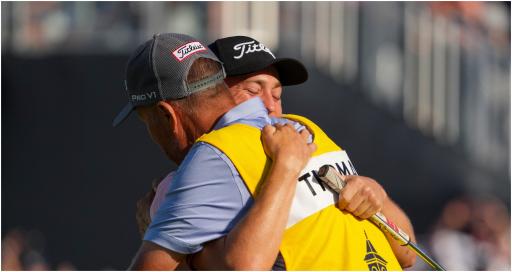 Jim "Bones" Mackay was quoted in the controversial Phil Mickelson autobiography saying Lefty was a total mystery to him, even after 25 years standing next to the guy. But it appears that his relationship with Justin Thomas is a little bit different.

Related: Justin Thomas reacts to his shank during final round at US PGA

At one point during Sunday's round he trailed by as many as eight shots but somehow found himself in a playoff against the young superstar Will Zalatoris.

He did not blink during the aggregate three hole playoff and as the sun set in Oklahoma a tearful Thomas was clutching the Wanamaker and wiping away tears.

Of course, it has been pointed out that Thomas owes a lot of that victory to his caddie Bones. Even Thomas said as much.

Were it not for a motivational pep talk on Saturday evening before the final round Thomas firmly believed he would not have won.

And as Thomas prepares to play the Charles Schwab Challenge on the PGA Tour this week, he is still gushing over his working relationship with Bones.

Thomas said of his caddie: "Yeah, he's been great. We're getting more and more comfortable every single week.

"He had a great moment there Saturday afternoon together when I got done, just kind of talking through some stuff and just basically putting me in a little better frame of mind.

"I think I'll be the first to admit I'm very, very hard on myself, too hard on myself at times, and it was good to have him there kind of as a reminder to just pretty much tell myself to kind of ease off and just relax kind of thing, without saying it directly like that.

"There's a lot of unbelievable caddies out there that bring a lot of different areas of expertise and help, and yeah, I feel like we've been a great team, and we've really enjoyed working together and kind of building toward winning a lot of golf tournaments and winning majors.

"So it was nice to knock that off together."

Has there been anything in particular that Bones has taught Thomas?

Thomas said: "I mean, nothing real particular. I like that if you ask him a question he answers it.

"I mean, the caddie I think is the hardest job because they can't -- a lot of times they can't win.

"Not necessarily by everybody but some players.

"It's a tough job because they obviously see us play and are around us more than anybody, but they get called in in some very, very big situations and important moments in golf tournaments. That's why we hire them.

"I have trust in Bones to where if I ask him a question and he answers it -- he wants the best for me. He's not answering it to try to screw me up. He wants me to do the best that I can.

"So I think having that trust in him has been very important."

Next page: Rory McIlroy will not play Irish Open