These two jokers decided to have a bit of fun when Jon Rahm's tee shot headed towards them at Riviera at the Genesis Invitational. 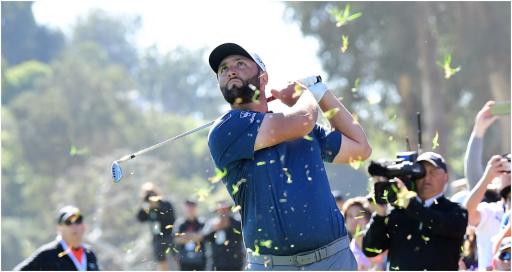 Jon Rahm was due a bad round wasn't he?

For the 27-year-old world number one, that finally happened during the second round of Tiger Woods' Genesis Invitational.

Remarkably, that was the first time he shot over-par on the PGA Tour since the first day of the Open Championship.

That was in July, seven months ago.

That was one of the longest streaks in tour history.

Can you guess who holds the record? Yep, Tiger Woods once went 52 rounds without shooting over par.

Charles Howell III, who recently celebrated his 600th PGA Tour start, tied the same streak as Rahm with 34 in 2003.

Rahm had to make a tricky putt just to make the weekend.

His eventful round also included these two jokers pretending to be hurt after an errant tee shot from the fiery Spaniard.

Then one man decided to spread out on the floor.

His mate (we presume) also decided to fall to the floor.

And he didn't even spill his beer! What a guy.

Take a look at what happened here:

Upon further review these falls may have been slightly dramatic. pic.twitter.com/WKPdfl8i8I