Viktor Hovland discusses what would make him move away from the PGA Tour, his lightning trousers and what he remembers from his first big pay day. 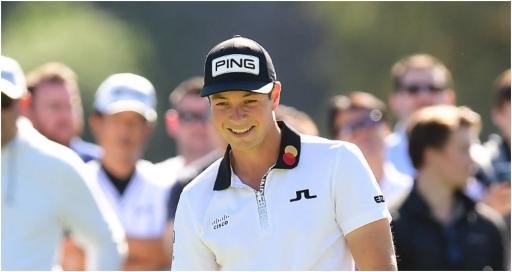 Viktor Hovland says if he "had his wish" he would continue playing the PGA Tour but added he would have "no choice" if all of the elite players jumped ship.

Speaking after his second round at Tiger Woods' Genesis Invitational, the Norwegian explained he just wants to compete against the best.

Hovland shot 71-64 which led him to a T7 spot going into the weekend as elite names sought to chase runaway leader Joaquinn Niemann.

In his post-round press conference, Hovland also revealed the source of inspiration behind his eye-catching lightning pants he wore on day two.

"It's JL [Jay Lindberg] and I guess the JL logo's just like in the thunder or lightning," Hovland, 24, said.

"It kind of looked cool and they're super comfortable, especially this morning, it's kind of chilly. I thought it worked out perfect.

"Maybe I should keep wearing them."

Hovland was then pressed about where his allegiances lie. To the PGA Tour or to the opportunities elsewhere?

"Yeah, it's obviously a lot going on and I just started out playing professional golf. If I had my wish, I would just keep playing the PGA Tour," he said.

He added: "I just want to play against the best players in the world. [If] everyone goes over there, kind of leaves me with no choice, but I would like to play the PGA.

"Obviously money is good, it's nice to make money, but that's not what gets me up every day in the morning. I'm just trying to get better at golf. Obviously a tournament like this at a course [like] Riviera and all the past winners, it's a really cool history.

"Just to be a part of that, that means something to me, being a PGA Tour winner. And yeah, winning these historical events, I think that's very cool."

What's Hovland's hunch about where all of this is headed?

"Well, hunches doesn't really matter too much, it's about what people do, but it seemed like a lot of good players are voicing their support for the PGA Tour, so that's certainly going to be a tall task for other leagues if the best players don't want to go. Again, we'll see what happens," he said.

Of course money is always going to be discussed with these questions. In this proposed SGL there would be mouth-watering, gauranteed appearance fees for the players.

Hovland was asked what he remembered about his first big pay cheque.

He said: "Yeah, I didn't really check it like that. It's more like, okay, I knew I was -- I had some security when I first turned pro, I didn't have to count every single dollar that I spend on air travel and food.

"That was like a big thing. Instead of not getting guac at Chipotle, I could get double meat and some extra Chipotle and I don't have to worry about it.