Max Homa discusses how his favourite memory from winning the Genesis Invitational didn't involve Tiger Woods and explains his stance on the SGL. 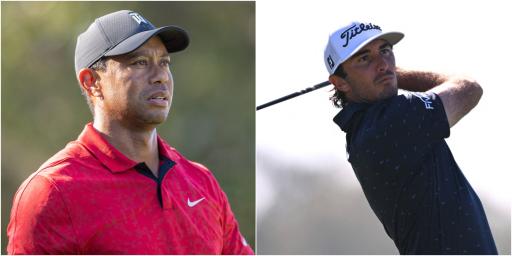 Usually when you are the defending champion of a PGA Tour event you can command a lion's share of the attention.

But for Max Homa at this week's Genesis Invitational at Riviera, it's a bit different. He knows as much. Tiger Woods is the host.

Such is the draw of Woods he was poked and prodded and asked about when, where and if he will return to playing golf again.

Woods doesn't know. He also wouldn't be drawn into whether an appearance at the Masters (or even the par-3) is on the cards.

Whether he wants to do that is another matter. Homa was asked about Woods in his press conference. And his response was striking.

Homa is a Los Angeles native. Winning that event and collecting the trophy from his hero at Riviera was a bit special.

Though one cool thing about Homa's memories of that week is that his favourite thing didn't involve the cat.

"Yeah, it was actually after the playoff. We hung around, did some pictures, got to talk to Tiger Woods, which was cool, and then my favorite memory for whatever reason is everyone kind of left.

"Obviously there was no fans, so it was just like empty in general, but everyone had left and Joe and I were grabbing my last couple things from the locker room walking out to the parking lot to leave and it was just us two and for whatever reason that felt very cool.

"You know, two kids from up the road, it kind of felt like the last people leaving the golf tournament.

"As Jamie Mulligan, famous coach out here, he says, 'Who did you beat,' and you say, 'I beat everybody.' That's what it felt like, we were the last people at the golf course at our favorite place to play on the PGA Tour. I don't know, that was my favorite part of the day honestly."

Another hot topic, or at this point and overly debated topic was the Saudi Golf League. Rory McIlroy said he was sick of talking about it. Tiger Woods explained his position a short time earlier. Jon Rahm pledged his allegiance, too.

Homa, 31, a two time winner on the PGA Tour, will be staying loyal. Homa has confirmed he has not signed a non-disclosure agreement or talked to anybody about joining a rival league.

Yeah, I don't know, the stuff's crazy. I, for one, have not signed an NDA, nor have I talked to anybody who would offer me an NDA.

"I don't know anything. It's been fun reading all of your guys' articles and piecing them all together.

"I heard one yesterday that someone said 17 people signed and somebody else said they haven't heard anybody, so I guess that's kind of telling of what's going on.

"Driving up to this golf course with memories of winning a golf tournament that Tiger Woods handed me a trophy, they don't have that in a breakaway league. Money's cool.

"But I can promise you right now that the furthest thing from my mind and furthest thing from anyone's question really was when I won this golf tournament, I made the most money I've ever made in one lump, $1.67 million, and that's not the part that I remember.

"That's my take on it. I'm not saying that these leagues couldn't be great, and things may change.

"My point is everything through this golf tournament that has made me get the chills as I talk about it and get the chills as I drive up here and think "what the hell" when I see my picture on things out on the golf course that I grew up to love, I would not be getting that anywhere else. That's my allegiance, I guess."