Defending champion Sam Burns spoke to the media ahead of the Valspar Championship on the PGA Tour. 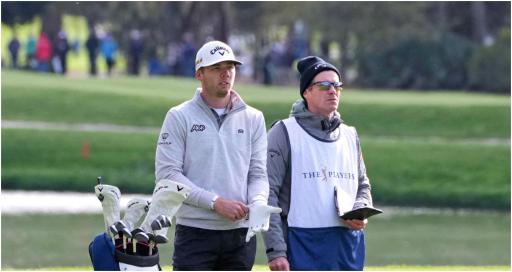 Sam Burns announced himself on the PGA Tour when he won the Valspar Championship last season.

The 25-year-old finally broke through after a string of impressive performances that prompted his name being mentioned in Ryder Cup chatter.

Although he confirmed he did get a consolation phone call from Steve Stricker, missing out on the side was extremely difficult for him.

He returns to Innisbrook Resort with a different perspective and told the media he believes his form is trending in the right direction.

Burns was in the mix at The Players Championship but his charge fizzled out. He finished in a tie for 26th at 4-under par.

"Tough week," Burns told the media in his press conference. "I just ran out of a little steam there at the end."

Now Burns, who also tasted victory again at the Sanderson Farms Championship in October, believes he knows the winning formula.

What was the difference that catapulted him from being a contender and a nearly man every week on the PGA Tour to finally winning?

"I think it was kind of sticking more to my game plan coming down the stretch," he said.

"[And] for awhile there I thought I kind of needed to play perfect, but really [I] just needed to kind of play steady and hit the correct shots and I was able to do that here last year and it worked out.

"So I think that was a big learning lesson for me."

Burns is currently 10th in the FedExCup standings, with four top-10s to go along with his win at the Country Club in Jackson.

What has winning done for his confidence?

The trophy from his first PGA Tour win now sits in his living room, he said.

Just how far could Burns go in the game? The game is there for him to become a multiple winner and also a major winner.

How big a deal is it for Burns to become the World No. 1 at some point in his career?

"I mean, obviously I think it's a goal, but I think it's kind of something that I have a lot of other goals set in place before that.

"I think it's kind of a byproduct of a lot of other things, and so really just trying to focus on the smaller details, preparation, and trying to improve my game in certain ways."

Goals are important for PGA Tour players. Justin Thomas typically always reveals his lofty goals at the end of each season.

Burns has a new one in mind after his Ryder Cup disappointment.

"Yeah. That was really tough," Burns reflected on not being picked.

"Obviously [I] desired to be on the team. It's something that I've always dreamed of as a kid and a goal that I had in place for the year, and so not making it was definitely difficult.

"But at the same time, it was cool to see those guys play really well and watch them win. Hopefully [I] get to share that with them the next time.

"And yeah, Presidents Cup is definitely a big goal of mine and something that I really hope that I'm on the team at the end of the year."