The Australian was bogey free until he dropped a shot up 18 and is joined at the top of the leaderboard with two others. 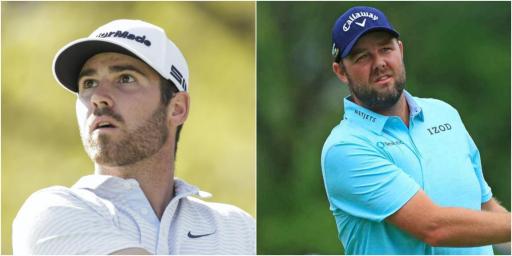 Patient Marc Leishman set the early pace at the Houston Open on the PGA Tour but he's being chased by some familiar faces.

Play was delayed in the first round for more than two-and-a-half hours because of extreme rain and violent winds at Memorial Park.

But when it resumed only gentle breezes greeted the players which allowed Leishman to go on the attack from the very beginning.

The Australian, 38, is searching for his seventh PGA Tour title.

He started his day perfectly with a birdie at the first and three more would follow as he made the turn in 35.

Only seven of 12 fairways were found by Leishman through his first 18.

He sent a loose drive out right down the tough 18th, put his second shot short of the green then misjudged his third and couldn't make par.

A solid 5-under 65 was matched by Talor Gooch and Russell Henley.

Matthew Wolff again is in the mix and is three back.

The 22-year-old is enjoying a ridiculous spell of scoring lately.

Prior to his round he admitted mental health issues still dogged him.

Last week Viktor Hovland became the first player to become a repeat winner on the PGA Tour in more than two years.

Brooks Koepka held that gong when he managed to defend the PGA Championship at the notoriously difficult Bethpage Black.

And in Houston this could not be replicated as defending champion Carlos Ortiz withdrew prior to the tournament with a shoulder injury.

Elsewhere, the PGA Tour's forgotten man Jason Dufner opened with a 4-under 66 after playing on a sponsor exemption.

Again, Gooch has also started a Thursday in fine fashion with seven birdies but he dropped shots at 12 and 13.

At the time of writing Koepka was waiting to start his round, as was Tyrrell Hatton, Ian Poulter, Max Homa and Shane Lowry.

Patrick Reed opened with a level par round of 70.

Daylight savings meant round one will have to be completed tomorrow.