The rules official has been announced by LIV Golf Investments as their new vice president of rules and competition. 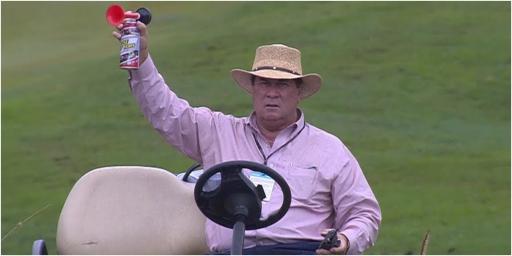 One of the most famous rules officials on the PGA Tour has been tempted out of retirement to join up with Greg Norman.

Slugger White, 72, has been confirmed as the vice president of rules and competition for the Great White Shark's Saudi golf venture.

White spent more than four decades on the PGA Tour but now he's been quoted by GolfDigest as saying: "It's a new chapter".

LIV Golf Investments, of whom Norman is the CEO and are bankrolling their golf series on the Asian Tour, announced the news this week.

RELATED: THE DEPRESSING END OF THE EUROPEAN TOUR

White will oversee a series of 10 new events on the Asian Tour and it is widely accepted they want to launch a rival league to the PGA Tour.

This week, the European Tour dropped a bombshell on the golf world by announcing they will rebrand as the DP World Tour in 2022.

Over the season, the total prize pool will be north of $200m and three events will be co-sanctioned with the PGA Tour.

This was seen as a direct response to Normal et al, who are funded by the Public Investment Fund from the sovereign wealth of Saudi Arabia.

MORE: BRYSON DECHAMBEAU HAS NAMES FOR HIS WEDGES

White told GolfDigest that he will be recruiting more rules officials and that he does not know when his duties will begin.

He is said to have told them that a schedule of the new events could be finalized at the end of the month.

"I don't know when it's really going to start, but it's going to be interesting," he told them.