Alex from GolfMagic lived a day in the life of former US Open Bryson DeChambeau, but what does that consist of? 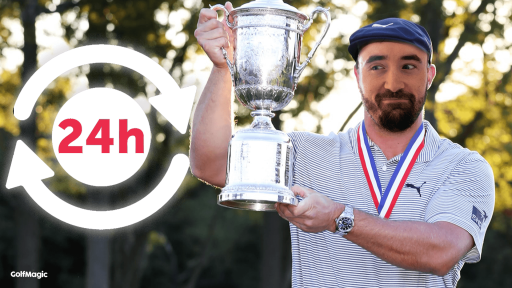 Bryson DeChambeau has set the standard for hitting distance on the PGA Tour. Something clicked in the 28-year-old's head last year and now he has a very clear goal at every PGA Tour event.

He has become a US Open champion, a Long Drive contestant and an eight-time PGA Tour winner through brute strength and a dedicated daily routine.

We wanted to experience what a day in the life of Bryson DeChambeau was like, so Alex from GolfMagic took on this challenge and became him for 24 hours.

According to DeChambeau, he begins his day with a cooked breakfast which consists of four eggs, five pieces of bacon, toast and two protein shakes.

For lunch, Alex had Bryson's favourite sandwich: peanut butter and jelly. Along with protein bars and three more protein shakes, Alex was in full Bryson mode.

Up next was speed training, the training that Bryson relentlessly targeted in his pursuit of increased distance for his play on the PGA Tour and at Long Drive competitions.

Alex completed his first speed training session which lasted 30 minutes. Working up a sweat, he achieved a swing speed of 124mph and a maximum distance of 340 yards.

After this, DeChambeau would go to the driving range and practice his game. Alex opted to practice his putting, which is an underrated strength of DeChambeau's game.

The World No. 6 was ranked 20th in strokes gained in putting last season and this was down to the meticulous putting drills that Alex shows in the video.

RELATED: ARE YOU ALLOWED TO REPLACE YOUR BALL IF AN ANIMAL SNATCHES IT?

While doing all of his practice and speed training, Alex is still guzzling protein shakes. After practising his short game, Alex headed back to Kings Golf Studio for his second speed training session.

If you thought this was enough work for the day, Alex then went to Underground Gym to work on his body strength. He completed drills such as the dumbbell bench press, the Romanian deadlift and the single-leg hamstring curl.

Alex finally reached the end of his day. Just as DeChambeau has stated before, he has a steak and potatoes for his evening meal and two protein shakes.

It is a very unique schedule for every day, as Alex soon discovered. But DeChambeau is a very unique individual and his routine has led to much success and there will surely be more to come for him on the PGA Tour.

PGA tour
bryson dechambeau
protein shakes
long drive
US Open
Previous
Are you allowed to replace your ball if an animal SNATCHES it?
Next
PGA Tour Rookie Taylor Pendrith has 3-SHOT LEAD on last day of Bermuda Champs