Joel Dahmen knew something was up when it was announced he was a member of the 2021 Ryder Cup side. 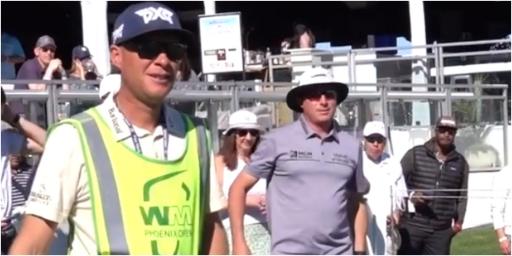 A confession: Joel Dahmen is fast becoming one of my favourite players on the PGA Tour.

Last week at the AT&T Pebble Beach Pro-Am, Dahmen was in contention in the final round playing alongside Jordan Spieth.

Over one putt, he gave it a little bit too much venom. He then shouted "fore" towards Spieth.

If you're willing to crack a joke like that when you are playing in a professional tournament with a lot at stake, you're a winner in my book.

Dahmen appears to be one of the more good-humoured players on the circuit at the minute.

His caddie is a man by the name of Geno Bonnalie. They have been friends for a very long time.

Bonnalie left his job to go and work for his pal and they finally tasted victory together at Corales Puntacana last March.

It marked a brilliant moment for what was a very long, tough journey for the pair. A proper grind.

His caddie often highlights some of the more amusing aspects of tour life on his Twitter page.

One of those moments included being tasked with grabbing his boss a nice, juicy hot dog moments before teeing off at the Sony Open.

Dahmen was also mistaken for a spectator in his cab drive on the way to the Sentry Tournament of Champions.

And he was involved in another case of mistaken identity again in his practise round at the WM Phoenix Open.

The venue was at the 16th hole at TPC Scottsdale. The announcer made the mistake of thinking he was welcoming Harris English to the tee.

Nope. Not even close. Still, give credit to Bonnalie and Dahmen, who played off the mistake like true professionals with wide grins.