Report: £100k fines given to LIV Golf players will double every event

According to reports, the DP World Tour sanctions imposed will double per event played by the LIV Golf rebels. 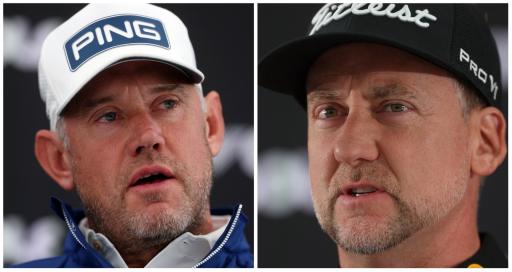 The golf war between LIV Golf and the established circuits took another twist today after it was announced the DP World Tour has finally confirmed sanctions for the rebels who played in the first Saudi-backed event at Centurion Club.

Although some players have resigned their memberships from the PGA Tour, others have kept their DP World Tour memberships.

It has been perceived that they are pinning their hopes on Wentworth HQ so that their future participation in the Ryder Cup won’t be affected.

Playing in DP World Tour events also represents a pathway to qualify into the major championships.

Each major governing body has not publicly announced how they will deal with the emergence of LIV Golf.

The R&A have stated that competitors who have qualified or are already exempt from the landmark 150th Open at St. Andrews will be allowed to compete even if they have played in the first LIV Golf event.

The DP World Tour have issued players with £100,000 fines and suspended them from participating in the Genesis Scottish Open, the Barbasol Championship and Barracuda Championship.

They have pledged further sanctions.

I understand that fines for DP World Tour players will DOUBLE (from today’s £100,000 announcement) for every conflicting tournament they play.
Contrary to some reports, LIV will NOT pay these fines, only any legal fees incurred by players should they appeal the sanctions.

More: How many players have joined LIV Golf?

The money raised from the fines will be added to the prize funds for upcoming tournaments and will be distributed through to the Tour’s charitable causes.

Keith Pelley, the chief executive of the DP World Tour, said: “Every action anyone takes in life comes with consequence and it is no different in professional sport, especially if a person chooses to break the rules.

“That is what has occurred here with several of our members. Many members I have spoken to in recent weeks expressed the viewpoint that those who have chosen this route have not only disrespected them and our Tour, but also the meritocratic ecosystem of professional golf that has been the bedrock of our game for the past half a century and which will also be the foundation upon which we build the next 50 years.

“Their actions are not fair to the majority of our membership and undermine the Tour, which is why we are taking the action we have announced today.”