Will Zalatoris FORCED OUT of BMW Championship round three

Will Zalatoris has withdrawn from the BMW Championship in Delaware on Saturday with a back injury while placed first in the FedEx Cup standings. 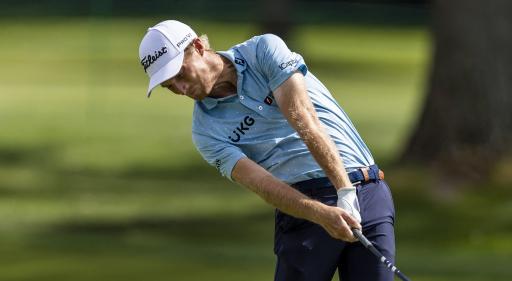 FedEx Cup standings leader Will Zalatoris has withdrawn from the BMW Championship with a back injury, casting doubt over his participation in the Tour Championship next week.

Zalatoris, 26, played four holes of his second round at Wilmington Country Club before deciding to withdraw. After he hit his tee shot on the 4th hole on Saturday, he felt pain.

After stretching with a medical assistant, he decided to withdraw and he informed his playing partner Emiliano Grillo. The World No.9 is projected to drop to number two in the FedEx Cup Playoffs.

This is not the first time that the American has withdrawn from a significant event due to a back injury. He was forced to pull out of The 149th Open Championship in Kent last season with the same problem.

Will Zalatoris has withdrawn in the third round @BMWChamps with a back injury. pic.twitter.com/mwV9SC06SF

This extremely disappointing news comes a week after Zalatoris secured his first win on the PGA Tour at the FedEx St. Jude Championship, beating Sepp Straka in a playoff at TPC Southwind.

It took three playoff holes for Zalatoris to earn what was an emotional victory. Prior to his maiden title, he had lost in playoffs at the Farmers Insurance Open and the US PGA Championship in 2022.

It is unclear at this stage if Zalatoris is to play in the Tour Championship at East Lake next week. He is very well-placed to win the FedEx Cup and bank the $18 million winners bonus.

Earlier on in the week, Champion Golfer of the Year and LIV Golf recruit-to-be Cameron Smith withdrew from the BMW Championship with a suspected hip problem.

The Australian, who won his first major championship at The 150th Open at St Andrews in July, is strongly rumoured to be joining the LIV Golf Tour for a figure of around $100 million.