Jordan Spieth and Michael Greller conversations are always so good! 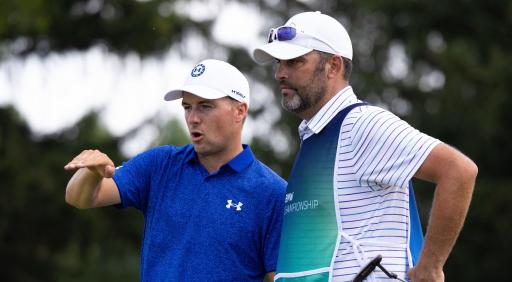 Jordan Spieth and Michael Greller conversations are always the best on the PGA Tour, and they did not disappoint at the par-4 5th on day three of the BMW Championship.

Only Spieth will very much wish he ended up listening to his caddie Greller, just as he did in Scotland recently.

Spieth drove into the fairway bunker down the left flank and was left with 164 yards to the hole.

The main issue was the lip of the bunker, as well as lots of water guarding the front left of the green.

Greller tried to persuade his boss to wedge his ball out short of the water and onto the fairway.

But Spieth was having none of it.

As it turned out, Spieth took on the shot at the green and fatted his ball into the water.

It would lead to a double-bogey six and at the time took him out of the lead.

Here's how their conversation played out:

JS: If I strike it well and it gets up, it's on the green.

MG: Yeah, I know, but what's wrong hitting out here and having a wedge to 15 feet?

JS: Cos I think that if I prioritise getting it up and it comes out fat or hits the grass, the chances of it going up into the water are so slim, like it would be short, and then I would hit the same wedge shot 20 feet right. But I think I can get it up and out, or I could hit a 9-iron to the right. I still think going long is better. I'm just going to try hit it really high.

MG: If you feel a 9, play at that right bunker.

JS: No, I don't think it makes that much of a difference. I'm still going at the middle of the green. I'm on an upslope, just trying to get it straight up in the air. I think that's enough. It's not a hurt wind, right?

MG: Yeah, if anything there's a touch of hurt.

JS: On this angle? [Spieth walks over to Greller at the side of the bunker and then back to his ball]

JS: I actually think I can do it, and I think the downside is the same, okay? This one is on me, okay.

MG: Alright, I trust you. Come on, trust your instincts here.

Spieth then hit the ball and said: "Oh no, I fatted it."

The ball came up well short in the water. Spieth walked out the bunker and said: "Can you guys call a rules official for me?"

After watching Spieth find the water, Sky Sports Golf's Nick Dougherty said in the commentary box: "Well the good news for Michael Greller is that one is on Jordan. You could see Michael was desperately trying to nudge him away from that call."

Sky Sports Golf lead commentator Ewen Murray added: "No, he wasn't having it."

To Spieth's credit he would bounce back with a birdie at the very next hole, but he then made three bogeys in a row to fall back into the chasing pack.

Next Page: Will Zalatoris forced out of the BMW Championship on day three