Will Zalatoris hits out at "Instagram morons" after US Open heartbreak

Will Zalatoris hit out at the "Instagram morons" in the wake of his crushing near-miss at yet another major championship. 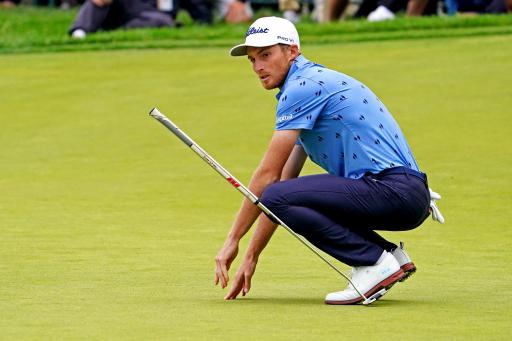 Will Zalatoris had some choice words for the "Instagram morons" in the wake of his crushing near-miss at the US Open.

Related: USGA CEO responds to criticism of US Open broadcast

Yet again it was major agony for Zalatoris, 25, who narrowly missed a birdie putt at the 72nd hole to force a playoff against Matthew Fitzpatrick at The Country Club at Brookline.

When his attempt agonisingly missed the hole by a matter of milimetres, the 2020-2021 PGA Tour Rookie of The Year fell to his knees and dropped his putter in complete heartache.

That meant he had to settle for yet another runner-up finish to go along with the 2022 PGA Championship and the 2021 Masters.

He was asked if this loss stung as much as recent ones. "This one [the US Open] hasn't sunk in," Zalatoris told the media.

"[The] Masters was pretty special, just obviously being there, considering that seven months prior I was playing on the Korn Ferry, and then having a chance to win the Masters.

"Yeah, this one's -- I honestly don't know what to take from this yet. I was pretty pleased just because I'm known for my ball-striking. I'm sure all the Instagram morons are going to say it has something to do with my left wrist flexion coming down, but I promise you, it's got nothing to do with it.

"I think just keep doing what we're doing. This one stings for sure, but I know that we're going to get this."

He added: "I'm three shots away from practically being a -- having a chance of being a three-time major champion. A bounce here or there.

"This week my driving was atrocious. I think part of that might have had a little bit to do with the hip. I thought that I -- the fact that how bad I drove it this week, to have a chance to win, I'm very pleased with."

Zalatoris turned professional in 2018 and made his ranks through the Korn Ferry Tour.

He is yet to win a PGA Tour event. He lost out to Luke List at Torrey Pines in a playoff at the Farmers Insurance Open earlier in the season.