Tiger Woods skipped the US Open last week to prepare for The Open Championship and a photo emerged of the 46-year-old's bare right leg. 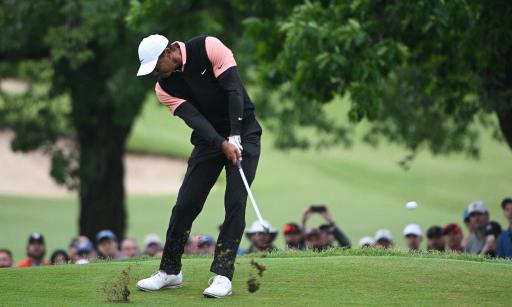 Tiger Woods has defied logic with his incredible return to the PGA Tour in 2022 and his recovery has been made even more astonishing off the back of a recent picture seen on social media.

Woods was pictured standing with another golfer with a pair of black shorts on while reportedly watching his son Charlie at a junior golf event.

As you can see in the image below, his right leg is markedly different to his left leg. In his first interview with Golf Digest after the car crash in February 2021, the 46-year-old revealed amputation was once an option when he lay in hospital.

There appear to be scars on his right leg which show the extent of the surgery he received. Nonetheless, if you can take something away from just one picture, at least the 15-time major champion appears to be back to full fitness.

It was disappointing to see him withdraw from the US PGA Championship at Southern Hills, but once footage emerged of him stumbling down a slope while practising in Tulsa, the withdrawal was inevitable.

Look at Tiger Woods’ right leg in this recent photo - incredible that he can play at all, much less competitively. @willbardwell @AlanShipnuck @firepitstories pic.twitter.com/oOa7fKZfOY

This new image also suggests his effort to make the cut at The Masters was even more monumental. He finished in 47th place at Augusta National where he sensationally won in 2019 after an 11-year major trophy drought.

Woods is now preparing to play at the 150th Open Championship at St. Andrews. He revealed his intention to compete when he completed his final round back in April.

Golf fans gave their reactions to this latest public image of Woods:

"The fact he can still compete is wild," one fan said.

"The fact he’s still hustling after that is a blessing for all of us watching, I say he doesn’t wear the leg sleeve and embrace it," another fan said.

"People who give him s*** for limping on a golf course, and still shooting high 70s on tour level courses after all of this can screw off," one fan commented.

"How’s the leg bro…?? Hope to see you out there soon... we need your energy!" another fan commented.

Next Page: Rory McIlroy falls short again but reaches World No.2 at US Open