Will Zalatoris was three shots short of the eventual cut mark with seven holes remaining at Sedgefield Country Club on Friday, but he found some magic to make the weekend. 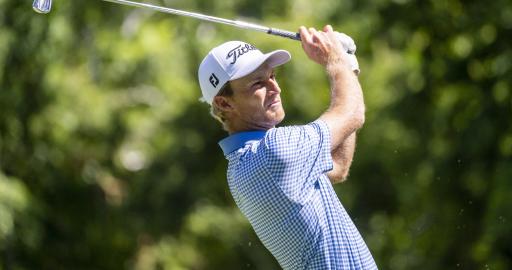 Much like many players in the latter stages of their second rounds at the Wyndham Championship, Will Zalatoris was staring down the barrel of the gun without a way out.

The 25-year-old carded a 71 in the first round and through 11 holes of his second round, he was on 2-over-par which was well short of the eventual cut of 1-under.

Like so many times this season, Zalatoris stepped up to the plate in emphatic fashion. From the middle of the par-4 13th fairway, he hit a majestic approach shot from 137 yards which nestled into the bottom of the cup.

The World No.14 cracked a smile as he walked to the green. He was now at level-par, but still chasing the cut. In 21 starts on the PGA Tour schedule this season, he has only missed five cuts.

After making a par on the 14th hole, he found the green on the par-5 15th hole in two shots and rolled in a superb 61-foot putt for his second eagle in three holes.

An absolute dart from @WillZalatoris

He moves two shots closer to making the weekend after holing his approach on the par-4 13th. pic.twitter.com/Dcsq4uK8mX

At 2-under-par, he was now safely into the weekend if he could hold on, but he did more than that. Zalatoris added a birdie on the 17th hole to card an unlikely 66.

In total, 87 players made the cut after 36 holes in North Carolina. This is the highest number since the cut rule changed to low 65 and ties in the 2019/2020 season.

He is still six shots behind Joohyung Kim and Brandon Wu who lead on 9-under-par, but you'd have to say he has an outside chance of finally securing his first PGA Tour victory.

Playoff losses at the Farmers Insurance Open and the PGA Championship as well as a second place finish at the US Open this year would suggest that it is only a matter of time until Zalatoris enters the winner's circle for the first time.

Despite not holding a trophy in his hands yet, Zalatoris has earned $6,631,474 in 2022. He is ranked 11th in the FedEx Cup standings and in good shape to challenge for the $18 million bonus at the Tour Championship.