Joohyung Kim, the impressive South Korean youngster, moved into contention during the second round of the Wyndham Championship on the PGA Tour. 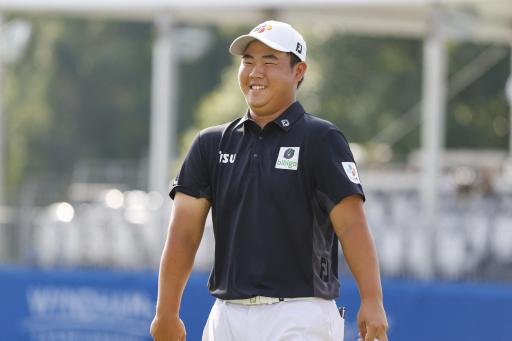 The impressive youngster Joohyung Kim forced himself into contention in the second round at the Wyndham Championship on the PGA Tour before play was suspended due to inclement weather.

Kim, who accepted a special temporary membership on the circuit perhaps in response to LIV Golf, fired a second round of 6-under 64 at Sedgefield Country Club in North Carolina.

The 20-year-old turned with a bogey-free 4-under par and made three more birdies on the back nine. The only blemish coming at the par-3 12th hole where his tee shot landed well short of the green and he failed to get up and down to save par.

Kim has been in impressive form of late, highlighted by his solid performance at the co-sanctioned DP World Tour Genesis Scottish Open, which was won by Xander Schauffele.

The South Korean has come a long way from Q School. Just check out the time where he defended his golf ball from a woman walking her dogs.

Kim shares the lead with Brandon Wu (67) and Ryan Moore (66). What's even more remarkable for Kim was that he started the tournament with a quadruple bogey eight on the par-4 opening hole. Now he co-leads!

"[I] told myself, you know what, I've got plenty of holes to bring it back if I just play well on my next 35 holes, and that's exactly what I did.

"I played better than I thought I was going to, so it's a bonus.

"Yeah, [I am] just definitely happy to finish the round today and just kind of laid back knowing I've got the weekend to play."

Jason Day was forced to withdraw from the tournament after 18 holes.

This is the last PGA Tour event before the FedEx Cup Playoffs. Several players face the prospect of losing their full playing rights if they do not play well this weekend.

One of the players in this bracket is Rickie Fowler, who has missed the cut and consequently lost his full playing rights. Perhaps he could be tempted for move over to a certain Saudi-backed series in the near future.

Former Masters champion Danny Willett has also missed the cut and also lost his full playing privileges. His exemption for winning the Green Jacket has now run out.

Some LIV Golf players, who are currently suspended by the PGA Tour, have taken action in an attempt to try and play.

Next page: Rocco Mediate is furious with the LIV Golf players