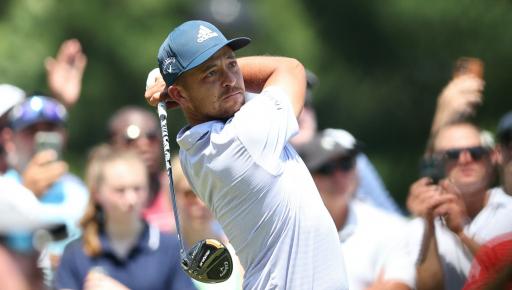 Schauffele fended off the likes of Patrick Cantlay and outstanding amateur Michael Thorbjornsen in the early part of the final round too, to win his first individual PGA Tour title since 2019.

The 28-year-old held a five-shot lead after 36 holes at TPC River Highlands and it is fair to say his sixth win on the PGA Tour and two-shot victory was more than deserved.

He was one shot behind with one hole remaining, but he capitalised on Theegala's 72nd-hole blunder when the rookie found the fairway bunker and needed two shots to get out of the trap.

Schauffele's initial one-shot lead at the beginning of the day was gone on the 2nd hole after he made a bogey and Patrick Cantlay birdied the same hole. They shared the lead on 16-under-par.

The leader is in trouble on 18. pic.twitter.com/UsJ7VpYSPY

The World No.16 amateur Michael Thorbjornsen played impeccably in Cromwell on Sunday and he almost made an albatross on the par-5 6th hole. His ball rolled up for a tap-in eagle and he was within four of the leaders now.

Thorbjornsen birdied four holes in a row from hole 8 to hole 11 to get within one shot of Schauffele. He was challenging to become the first amateur to win on the PGA Tour since Phil Mickelson in 1991.

After bouncing back with birdies on the 4th and 6th holes, Schauffele poured in a 26-foot putt on the 11th hole to open up a three-shot lead from Thorbjornsen, Theegala and J.T. Poston on 19-under-par.

Once tied for the lead, Cantlay almost instantly dropped out of contention with bogeys on the 7th, 8th and 10th holes as well as a double-bogey on the par-4 12th hole.

Schauffele bogeyed the 12th hole and with birdies on the 13th and 15th holes, Theegala drew level with his fellow American on 18-under-par with four holes remaining.

Theegala found a divot hole in the middle of the 17th fairway, but this was no issue. He drew a superb approach tight to the pin and took a one-shot lead into 18 after rolling in the birdie putt.

The winless PGA Tour rookie hit a driver off the 18th tee and his ball nestled into the bottom of the lip of the lefthand fairway bunker. He went for the green from 124 yards away but left his ball in the bunker.

He went on to harshly lip out for a bogey. What looked like his first win on the circuit became an agonising tied second-place finish, compounded by a double-bogey on the final hole.

Schaffuele made an impressive birdie to seal the deal by two shots. It is his second win of the season after winning the Zurich Classic of New Orleans with Cantlay.