You initially wouldn't recognise Scottie Scheffler in this new clip 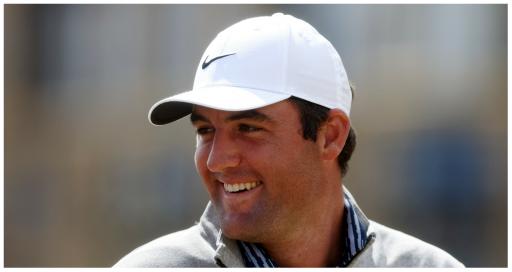 Dustin Johnson may have joined LIV Golf  but it appears we have a suitable successor to the PGA Tour's beard guy: Scottie Scheffler.

It's a quieter part of the year now. The fall swing has just concluded and so we look ahead to 2023 and another year of exciting major championships.

As you would expect, Scheffler is spending his time off trying to get into better shape.

You might have noticed that Justin Thomas - who has warned Max Homa to stay away from Bones - has liked the post.

Perhaps that is the two-time major champion giving 25-year-old Scheffler his approval of his fresh look?

Of course Scheffler's beard was picked up by social media users.

It was pointed out that there are many other PGA Tour players who have rocked a beard for quite some time.

What do you think? Can you get on board with Scheffler 2.0? In fairness, it has often been pointed out that Scheffler looks much, much older than 26 years.

This clearly does him no favours.

Scottie Scheffler will officially succeed DJ as the Beard Guy™️ on Tour pic.twitter.com/JjBb46OEBd

Would argue that Cameron Young looks more like DJ than DJ does pic.twitter.com/JIQwhNxAaa

Still a fan of this work of art from @GrahamDeLaet. pic.twitter.com/4VA7ZGWKFS

Speaking of changing images, Bryson DeChambeau has recently opened up on his famous bulking diet.

DeChambeau turned up to the 2020-2021 PGA Tour season looking considerably large and in charge. The man was an absolute unit.

Now the American admits that his diet was a mistake.

"I had such huge mood swings from it, I look like I'm 20 again, not 35.
"I ate things that were not great for my system that I was very sensitive to and ultimately it got to the point where it was a little bit too much.
"I ate improperly for almost a year and a half and I was starting to feel weird, my gut was all messed up and so I went completely healthy and went on a Whole-30 diet, got a nutritionist. I was super-inflamed."

For Scheffler, it seems like there is no danger of him joining up with Johnson in the LIV Golf anytime soon.

"For me, I feel like the PGA Tour is the best place to play. My dream was to play on the PGA Tour. My dream was never to maximize my financial benefits. I feel very blessed and fortunate to play golf and get paid for it, so for me, I'm not looking to go out and do anything else."