When Tiger Woods won here he overshadowed Hideki Matsuyama but now the Japanese golfer is getting all the attention. 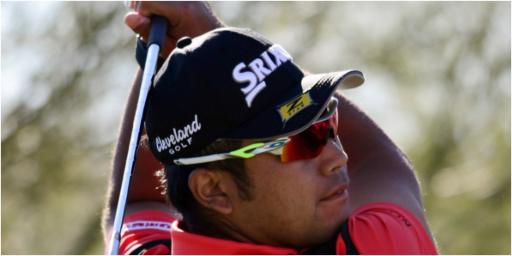 If you haven't been watching the PGA Tour this week you could be forgiven.

Not because the quality of golf on display is not something to be admired but the time zone makes it a bit tricky.

In the UK fans are waking up to the highlights and across the pond United States viewers are getting some shut eye just as the players start.

Which is why the PGA Tour decided to try something a little different this week by getting some players in the commentary booth.

Hideki Matsuyama’s caddie Shota Hayafuji bowing to the course after their victory at Augusta National. #TheMasterspic.twitter.com/QeqtCl1hzq

Pat Perez, too, took the time to impart his wisdom as home favourite Hideki Matsuyama rose to the summit after 54 holes.

Matsuyama, of course, is something of a cult hero in his native Japan after he won the green jacket at Augusta National in 2020.

The Masters champion then played at the Olympics but missed out on the gold to Xander Schauffele and instead took the bronze metal.

And his cult like status has thousands of fans following the 29-year-old at the Accordia Golf Narashino Country Club.

Hideki Matsuyama has been making it look easy in his home country
pic.twitter.com/3cclX0ODSu

An interesting statistic about the first Japanese player ever to win the Masters is that he is yet to shoot worse than 68 at the ZOZO.

That is all the more impressive considering he has a legion of fans following him.

Perez told the media: "He has so many cameras around him all of the time.

"I tried to say hello. I told him I don’t know how you deal with the cameras all of the time.

He said, ‘I pull my hair out sometimes.’ … He's had it for so many years now.

It's second nature to him. I can’t believe being the guy he is in the country right now.

Everybody wants him to win. And here he is leading. And the pressure … it doesn't look like it phases him at all."

NEXT PAGE: PAIGE SPIRANAC OFFERS HER ADVICE TO ASPIRING PROS