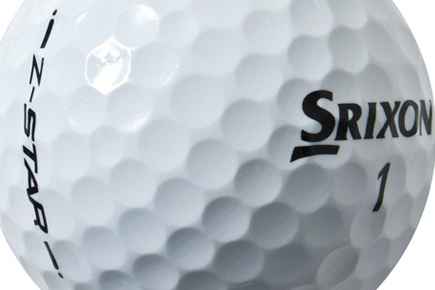 Tremendous spin with wedges; durable; solid, firm feel off putter face; holds line well in wind
Price is expensive but the norm for a 2013 ball
Our score:
Overall:
4
PRICE: £48.00 YEAR: from 2013

How Michael Jackson would have loved the new Srixon Z-Star ball.

Stepping up on the successful 2011 Z-Star, Srixon claims its new 3-piece ball spins more than ever - and on first inspection, we can safely say we’ve never enjoyed so much moon walking from a wedge before.

This was all down to the new ‘344 speed dimple pattern’, providing 4% more dimple coverage than the brand’s previous models, and a specially enhanced Neo Energetic Gradient growth core that gets softer from out to in.

With fewer spaces in the dimples and a larger diameter core, we also found that aided better stability in the wind on all iron shots – a vital element out on the course right now.

While we struggled to obtain any noteworthy spin with our mid-to-long irons, better players will no doubt be dropping and stopping with ease. And we wouldn’t say drives were travelling any further than its predecessor despite the extra spin, although this will no doubt vary across the board.

We did, however, enjoy a firm, solid feel off the face with the putter and that inspired confidence standing over the ball.

In terms of appearance, Srixon has maintained both Pure White and Tour Yellow versions of the Z-Star but there’s a different side stamp with a dot and dash replacing the arrow and dot of 2011 which was acted as a nice alignment aid off the tee and on the green.

Plucking the same ball out the cup at 18 as we started with on the first, durability was also impressive for such a soft cover as very few scuff marks were identified on the ball.

The new Z-Star is probably better suited to single-figure handicap players who favour extra spin with their irons and wedges but also for those that crave a ball that is firm to putt with.