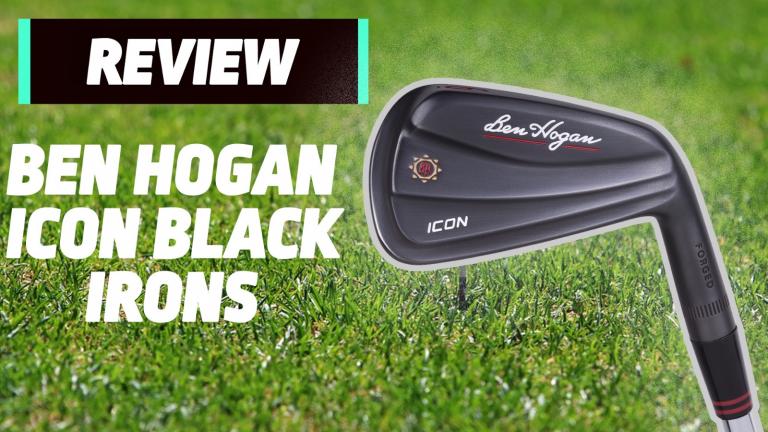 Incredible value for money; they sound unbelievable at impact; don't feel too much like a blade which appeals, player looks with game improvement feel; fairly forgiving for a player iron
Game improvement players will be left frustrated for at least another year
Our score:
Overall:
5
PRICE: £795.00 YEAR: from 2020

Ben Hogan will forever go down in the history books as one of the game's very best golfers, and it's fair to say the company's new Icon Black irons will follow suit when it comes to the better player iron category.

Ben Hogan, who died in 1997 aged 84, is rightly considered one of the greatest ever golfers to have graced the game.

Notable for his profound influence on golf swing theory and his legendary ball striking ability, Hogan won 9 major titles which ties him with Gary Player for fourth in the all-time majors list, trailing only Walter Hagen, Tiger Woods and Jack Nicklaus.

Hogan is also one of only five players to have completed the career grand slam of winning all of golf's four majors.

In 1953, Hogan typed out a message to PGA professionals promising the merits of his new brand's debut clubs. It read: "Best performing, best feel and with the best eye appeal."

Ever since then, the Ben Hogan Golf Equipment Company has embraced this mantra with every single club it has produced.

Watch the video below for our in-depth review of the new Ben Hogan Icon Black irons:

The standard 4-iron through to PW set is available in a traditional and durable nickel chrome finish, as well as a darker and sultry DBM (Diamond Black Metal), which is the set GolfMagic has tested out. Regardless of the finish though, the iron number is etched in red along the sole.

Graphics on the rear include the BH sunburst and Ben Hogan signature logos - as well as "Icon" subtly engraved into the high toe and "Forged" along the length of the hosel.

The Diamond Black Metal finish is incredibly durable; much more so than 'painted' dark finishes used by other companies. The DBM finish reduces wear on the grooves so better players can impact the spin necessary to shape shots left and right, or flight shots up and down. The finish also adds no weight to the club head.

The Icon chrome irons have a nickel-chrome finish for players who prefer a more traditional look. Nickel-chrome is also very durable, and has been a proven way to protect forged club heads and ensure they look great for years to come.

Either way, the Icon irons will deliver that soft, buttery feel that all Ben Hogan forged irons and wedges are famous for.

Looks - 10/10: They need to be seen in person to be appreciated. They are simply stunning - one of the very best lookers we have seen in the player iron market this season. The black finish really does surprise, and really suits the design of the club. The head isn't too small and looks great at address. It's by no means intimidating, either.

Feel and Performance - 9/10: It doesn't feel like a muscleback iron. There's loads of workability to these. Fairly forgiving on off-centre hits, which is great for a player iron. As we say, it's not intimidating over the ball. It's got the player looks with a bit of game improvement performance, and that really appeals to us. It doesn't feel too much like a blade and we like that. It felt easy to hit draws and fades. We are not thinking of anything other than we are going to hit a good shot over the ball. The sound is also unbelievable - it's as good as any acoustics on a player iron we have tested this year. The finish is also very durable and we love that.

Overall - 10/10: There are very few negatives with this club, if any. The bank balance shudders in a way with these clubs when you consider its overall price (£795) at nearly half the price of some of its competitors. The looks are as good as anything out there in the player iron market, and we love the black finish, which is particularly durable. Its performance is second to none. We would not recommend these irons for anyone in double-digit handicaps, it's very much one for the better ball strikers out there. But if that's you, then we highly recommend you give these a closer look this season. They play well, they perform well, and they look and sound incredible.

For more information and to purchase, please head over to the Ben Hogan website.