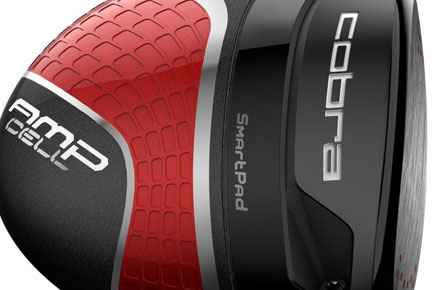 A serious piece of kit.

Turning up the volume on the successful AMP of 2012, the AMP Cell seamlessly blends Cobra’s innovative technology with the fashion-forward approach of its sister company Puma.

The AMP Cell driver is as trendy as drivers come, and as a Manchester United fan I took an instant shine to it in red, black and white. Other colours on offer include silver, blue and Rickie Fowler orange.

The stand-out feature with this driver is an easy-to-use adjustable hosel called MyFly, which presents you with six different lofts for the price of one, allowing the golfer to optimise trajectory and distance.

Take out the wrench provided and customise your driver the way you like it.

Independent loft adjustability is a welcome addition to the game. There really is nothing worse than heading to a pro shop, taping up a new driver before handing over some dollar and then realising a week later you should have gone higher than a 9.

On top of all that, the sole has a scooped front and rear area – dubbed SmartPad (a 1.5cm bar that goes right across the sole) - that allows the centre of the club to sit lowest when the driver is positioned on the turf.

One of the reasons for the introduction of SmartPad Technology is that when you change loft you can affect face angle. SmartPad technically gives the sole a single point of contact with the ground no matter how you align the face and it also keeps the face square through impact, independent of which loft you decide to use.

Wrenched to 10.5-degree, the AMP Cell generated terrific ball speed and travelled very straight and true. The ball was travelling a little higher than ideal, so a quick switch down to 9.5, with the club sitting exactly the same as before at address, and ball flight was on my desired mid-to-high launch and helped lower the spin rate for greater roll.

The two draw settings on the 9.5-degree and 10.5-degree lofts give the ball flight a miniscule draw, so that will no doubt prove a welcome addition for the fader out there.

The AMP Cell was also slightly more forgiving than its predecessor, as the company’s renowned E9 Face Technology features a 12% larger elliptical face to maximise ball speed on low-heel and high-toe shots.

Aesthetically, this club looks very cool and stands out from the crowd, particularly with its lovely weighted paint splattered graphic Fujikura Fuel shaft that comes with paint splattered head cover.

The sound off the face is a little loud but by no means overpowering.

Overall, the Cobra AMP Cell is a serious piece of kit that will no doubt appeal to the younger market but also to the player seeking greater forgiveness and independent loft adjustability.

It’s not the cheapest club on the market, carrying a recommended retail price of £250, but, hey, it’s six drivers in one...