'Hot Metal' plasma-welded titanium face offers high ball speeds off larger parts of the face, while extreme MOI helps keep the ball straight. A vibration-dampening internal hull prevents reverberations from miss-hits passing up the shaft. Available in 9.5, 10.5 and 12-degree lofts for right-handers, and 9.5 and 10.5 for left-handers. Standard graphite shaft is the Exsar DS4 in LL, L, LT, R and S flexes 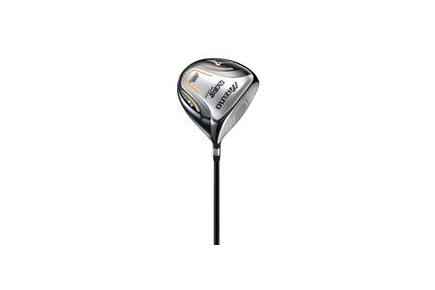 The MX-700 driver is a bold step in the right direction of capturing a new generation of mid to high handicap golfers looking for a highly-engineered, well-designed driver at a great price point.

Mizuno's on-going quest to find a driver that will really capture the imagination of golfers in the same way that its irons have, continues with the MX-700, which breaks the mold both in terms of looks and feel of what has come before.

The new eye-catching yellow livery on the sole of the club is a big departure for Mizuno, which has stuck to its traditional blue in most of its driver models to date. The change of colour is clearly aimed at creating a new concept for the MX-700 range, which also includes matching fairway woods (another first for Mizuno) and a couple of hybrid options.

Upgrading the MX-560, the new MX-700 is designed to appeal to a wide range of players seeking a high level of forgiveness. The 460cc head features a new 'Hot Metal' plasma-welded Ti9 titanium face, which Mizuno claims will deliver high ball speeds rom a wider area clubface. The result, says its engineers is extra distance and more stability (from extreme MOI) to help keep the ball straighter and in play.

Performance-wise, the MX 700 is impressive. For me, it delivered consistently high, long and gun-barrel straight tee shots.

And backing up my performance findings, recent independent launch monitor testing during the PGA Merchandise Show in Orlando revealed that the MX-700 generates both the highest launch angle and lowest backspin rate of all new driver launches.

Mizuno's Global research and development manager, David Llewellyn, believes this launch/spin combination is the holy grail of any driver.

“It's very hard to combine a high launch angle with a low spin rate - but it's unquestionably the way to produce the longest drives,” he says. “Every manufacturer in the market is trying to find the best way to achieve this combination. The Hot Metal face insert is the latest part of our solution and tests prove that it's the very best method available.”

In my own tests, the titanium face seemed exceptionally solid and the ball felt like it was really jumping off the face. The traditionally-shaped black clubhead has some graphics painted on the crown, which are designed to make the head appear smaller at address - maybe they're thinking is that the 'confidence-inspiring' monster head looks of some drivers has been taken a step too far?

To my eye, the MX-700 sits well behind the ball and although it appeared slightly closed at address, the ball flight was fairly neutral.

Given the high MOI set up, I believe that better players would struggle to work the ball through the air - left to right or right to left to suit the course or conditions. With the MX-700, straight is the shape of 2009. So while the MP-600 will remain Mizuno's first driver option for the Luke Donald's off this world, and those who like to draw and fade the ball at will around the world's tournament courses, for us mere mortals the straighter the better.

The sounds of drivers in recent months have become as much a part of their performance as their technology and I can say with some authority that the sound of the MX-700 at impact is a big improvement on the MX-560, which I, for one, found offensive at times.

The MX-700 has more of the muted 'thud' of a persimmon head from the 1980s and is none the worse for it. Too many recent driver launches have tried to impress golfers with over-enthusiastic acoustics, hoping that we might mistake volume for power.

For some it back-fired and it encouraging to see some manufacturers reigning in the worst excesses of sound pollution.

For those with a fascination with headcovers - and many of you will even admit to a certain fetish - Mizuno has sensibly opted for the old sock-style, allowing ample room to whip it off the clubhead without need for zips or magnets.

The MX-700 is keenly priced at just under the £200 threshold and with little to fault it, it could be Mizuno's most marketable driver yet, especially for those looking for a matching set of fairway woods and/or hybrids.

Mizuno still has a long way to go to get its regular better iron players to think about adding a Mizuno metal wood to their bags, but the MX-700 driver is a bold step in the right direction of capturing a new generation of mid to high handicap golfers looking for a highly-engineered, well-designed driver at a great price point.