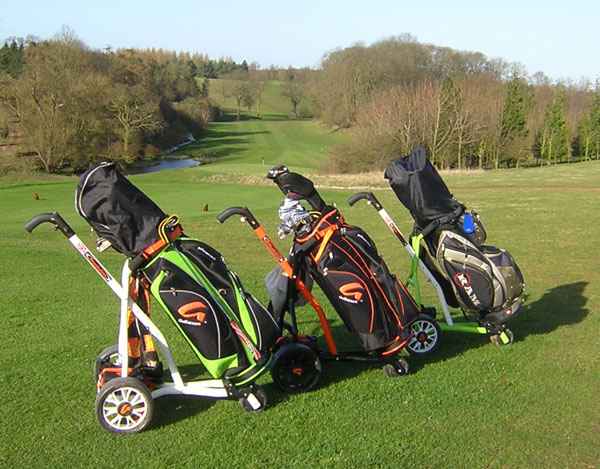 Solid, reliable workhorse with a dash of colour

Ten years ago, I couldn't imagine myself using a powered trolley. Surely, they were firmly in the territory of the Tuesday afternoon ladies medal or the less agile senior brigade? For regular golfers they carried the stigma of a wuss.
You might pull or push a trolley under your own masculine horsepower or carry a bag on your shoulders to show you were in complete control of your game and your fitness. But to allow a trolley to become your motorised mule brought a frown of ridicule to the brows of your playing partners.
Then everything changed when a research group, supported by the English Golf Union, discovered that using a powered trolley to lug their clubs, provided an energy-saving boost to young golfers - enabling them to keep their bodies and their minds active for longer in their round. No more would they run out of physical and mental steam approaching the 15th and 16th holes.

A powered trolley kept them energised for longer and, claimed the scientists, could be worth a saving of upto three or four strokes a round.
Every golfer seeks and advantage and soon powered trolleys were cool and manufacturers  surged into the market. Ever since, along with distance measuring devices, it has become the largest growth area within the golf industry.
Golfstream is the latest to join the movement with its appropriately named Revolution trolley and in the five rounds I've used it over varied terrain, I've been impressed with the robustness of its build, its quiet, seemingly effortless power and its reliability under the weight of a 40lb cart bag of equipment and accessories.

The makers, already recognised within the industry for their powered trolley spare parts business, pride themselves in their patented ‘one-click’ mechanism - folding and unfolding the trolley in one, simple movement using a subtle lever on the pistol-grip handle. The main framework is rivet-free and made from aircraft grade aluminium and, I'm told will take at least a 15 stone man's weight - though why you'd want to, I can't imagine.

The Revolution's on/off switch doubles as an accelerator, with an illuminated digital display identifying how to change speed to match my preferred walking pace.

I haven't yet fully mastered a control system which also enables me to send the machine off remotely to stop at one of five distance settings - from roughly 10 to 50 yards - but it's a facility I detest anyway. Remote-controlled trollies that loom into my peripheral vision while I'm addressing a shot are not popular in my fourball.
Priced at just under £450 it's in the upper range of electric trollies - and a version with a digital brake and a LitePower Lithium battery will cost even more - but as golf equipment to save you shots and energy - it's a better investment than an ill-fitting driver or a set of miss-matched graphite-shafted irons.

As a powered trolley it's the strong, silent type. It's a solid, reliable workhorse with a dash of colour that won't let you down, whatever the undulations of the course it faces.