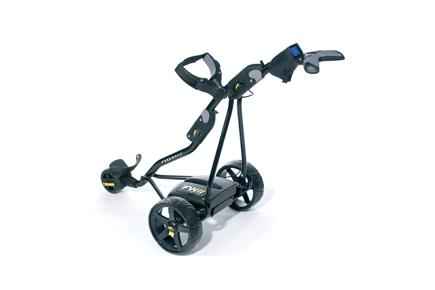 The lithium battery and the cable-free technology is a massive step forward but a few small details, such as the handle comfort and screen adjustability, slightly let down the overall package for such a pricey piece of kit.

Having been converted to the joys of powered trolley use about five years ago (partly out of laziness and partly just because I get to test these things for a living), I won't waste my breath or your valuable web-surfing time by extolling the virtues of carrying versus power trolleying.

Suffice to say, if you play a lot of golf, and by that I mean at least once a week or more, a powered trolley is the only way to go. It takes the weight off your back and leaves you to swing in total freedom, unencumbered by straps and and allows you to use a bag that will keep your clubs in better condition. Remembering to recharge your battery and finding space in the boot of your car are, of course, issues that all trolley users have to contend with, but if that's not a problem then the only option is which model to go for.

Powakaddy has dominated the powered trolley market for many years and despite the arrival of several other brands, remains at the forefront of this fast-growing sector thanks to its commitment to innovation, as well as its renowned after-sales service - vital whenever you buy something with moving parts.

However, with quality brands like Motocaddy and GoKart snapping at its corporate heals, PowaKaddy has had to step up to the mark to retain its popularity, especially given its high end price points.

Its latest launch is the PowaKaddy Freeway II, packed with high tech features, some of which are great and some you could frankly live without, but I'll let you be the judge of that. After two rounds of high octane activity with my lithium-powered model, I came away raving about some features, and rather non-plussed by others.

Top marks goes to the lithium battery (weighing in at a wallet-draining £650), which not only is no thicker than a Jeffrey Archer novel (and equally lightweight (85% less than a standard lead battery), but comes without leads and cables, allowing it to be slipped in gently into its housing with consummate ease. It's a thing of rare beauty and makes my regular playing partner's old PK model look like something out of the Ark.

The traditional three-way folding mechanism is sturdy, solid and straightforward, while the wheels clip on and off with an easy-to-operate sliding catch. The spoked wheels might be a pain to keep clean in the winter, but they give it the required sporty look.

The 'ergonomically-designed soft touch hand grip' didn't feel that soft in my hands, and where the two halves of the handle clipped together offered a rather sharp raised edge that kept catching my soft, journalistic fingers. The multi-function control panel features a LCD display which I found rather unimpressive, mainly because I'm 6ft 3inches tall and the screen is not adjustable, resulting in me having to stoop down to see the readings at the top.

The speed options (1-9) were acceptable (although anything more than 6 is 'running mode' which seems rather pointless). I also found the leap from 4 to 5 rather alarming, and would have preferred a 4.5 for proper walking comfort. In that respect, the old 'rolling knob' mechanism was much more appropriate, as it allowed for finely-tuned speed changes, especially from a standing start. I found that if I didn't press down hard enough, the buttons didn't respond to commands, resulting in two crashes when I thought I'd turned it off, but hadn't.

The 'Distance Measuring Facility' is capable of measuring how far the ball has been hit (you switch it on and walk from where you hit it to where your ball finishes up), while the distance covered during the round was fine if you're an orienteering anorak. Frankly looking at all these bits of data spoils the enjoyment of walking around the golf course and is no substitute for a GPS system if you're into computer-aided course management. To ensure you don't break any rules in competitions where distance-measuring devices are not permitted, these two functions can be easily switched off by selecting 'Competition Mode' when you turn on the trolley's power.

The digital display also has a 10, 20 and 30-metre automatic forward-moving function, which I used once, but was so fiddly to set that I didn't bother again. Also, judging how far 10, 20 or 30 metres is away is also quite difficult and could lead to it disappearing into the trees or, heaven forbid, a lake. Knowing the speed of the trolley and the time of day are all well and good, but neither essential to life as we know it.

The mechanisms to hold your bag in place were excellent, with the top loader capable of cradling all shapes and sizes of bag, while the bottom elastic strap had a handy extra strap to help you slip it on and off.

For those who like optional extras, you can buy an umbrella holder (very useful) and a seat (good for slow rounds). It also comes with a two-year warranty.

The size, weight and longevity of the lithium battery, and the cable-free technology is a massive step forward for powered trolley technology but a few small details, such as the handle comfort and screen adjustability, slightly let down the overall package for such a pricey piece of kit.