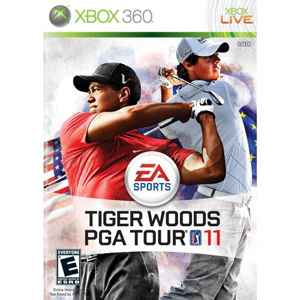 Inclusion of the Ryder Cup
Non-European/American players can play in the Ryder Cup
Our score:
Overall:
4
PRICE: £39.99 YEAR: from 2010

It would be easy start this review with a patronising recap of Tiger’s fall from grace.

You know, the sex scandal that led to his family and sponsors dropping him quicker than Robert Green would have… well, dropped him.

One company that fervently stuck by the world number one was Electronic Arts, who have put his name on their multi-million dollar PGA Tour franchise for a thirteenth year in a row.

And for the first time since Woods and EA joined forces in 1998, the 14-time Major winner is not alone on the cover, with Irish sensation Rory McIlroy also featuring in the artwork.

But where there’s madness there’s often method, and the reason behind the decision is because, for the first time ever, the game features the Ryder Cup.

In last year’s game, you’d shoot a sub-50 round then you’d struggle to break 100 without really doing anything differently.

I was ready to give up, but the lure of the Ryder Cup made this year’s effort too irresistible. That and because it was, you know, free.

“What’s that boss, you want me to play a videogame then write about it? And during work hours? Go on then, you’ve twisted my arm.”

Then, as my Ian Poulter-shaped avatar stood on the 18th green, needing to sink a two-foot putt to win it for Europe, it dawned on me (ironically at around 6am).

EA have finally found what was missing from the game.

The Ryder Cup brings out competitiveness between Europe and our friends from that no other sport can.

Remember that Ryder Cup? You know, the one in 1999 where the behaviour and etiquette of the US team was questionable at best.

Well this is your chance for revenge. This game encapsulates the rivalry, joy and despair beautifully.

The gameplay is better than its ever been, but it's still not perfect. EA’s problem has forever been the putting system, which has always been either too easy or too hard. But at least this year it’s more consistent.

With more courses and players than ever - and new gimmicks like the Focus Meter, Experience Points and superb GPS system - this is the most comprehensive version of the series yet.

And with the Wii’s MotionPlus and PlayStation 3’s Move controllers being incorporated to make it the most realistic golf sim of all time, this might just replace the real game forever.

Tiger Woods PGA Tour 11 is out now on XBox360, PlayStation3 and Wii.