Sharper blade profile featuring tungsten weight in the side to increase MOI and reduce loss of distance and direction on mis-hits. Milled face and sharp grooves for more spin to attack the green from any lie. Reduced offset, compact head and thin topline. Silver chrome finish, available standard as 5-PW with steel shafts. Graphite shafts and 3- and 4- irons available at an additional cost. 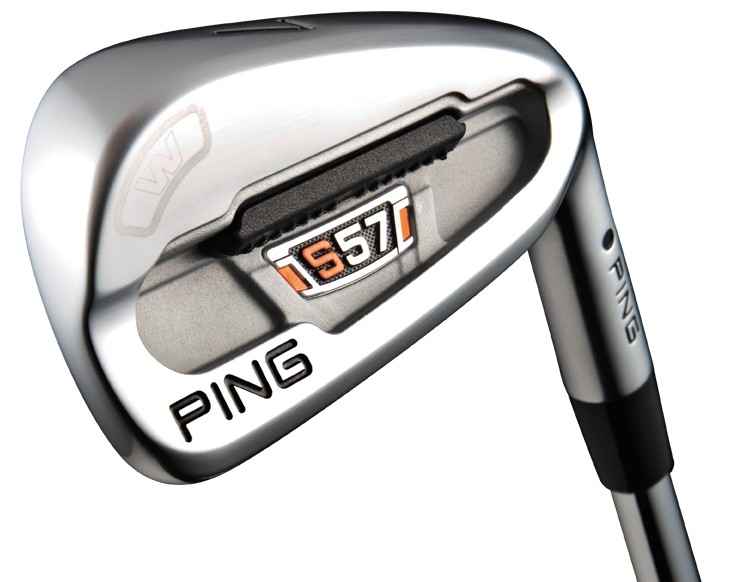 The third incarnation of Ping's bladed iron, the Ping S57 iron is the company's best yet. Success has been forthcoming on Tour for the likes of Miguel Angel Jimenez and Hunter Mahan and most significantly yesterday Angel Cabrera, who claimed Ping's first Masters win.

But don't let a professional pedigree put you off if you're not quite at that level. Yes, the brushed steel Ping S57 is beautiful to behold, ticking all the blade boxes beloved of the better player - compact head, thinner topline, narrow sole, heavier feel - but in managing to cram it full of game improvement technology, Ping engineers really have come up a club that offers the best of both worlds.

By adding a tungsten weight in the toe, increasing the hosel length and allowing just a small cavity on the rear of the club, Ping immediately made the Ping S57 iron more stable, more solid and more forgiving than a traditional blade.

You don't have to be picking the ball off perfectly to produce good shots with the Ping S57 iron and even if the odd one is hit slightly fat, the urethane insert and stabilising bars on the rear of the head are on hand to dampen any unwanted vibration and convince you that the strike wasn't that bad, after all.

Obviously, these Ping S57s aren't miracle sticks that can mask poor ball striking, but for a half-decent player who wants the feel of a blade without the fear, it's a club that is more playable than you'd expect (it even has a dab of offset to help square the face at impact).

At address it sits neatly behind the ball and despite being smaller than most irons I've owned, it's not a look that is overly intimidating for a mid-handicapper. In fact, having played with the Ping S-57s for a number of rounds, I can safely say I have hit more good shots with these irons than any other.

Consistency of distance is excellent, the naturally penetrating ball flight gives plenty of power while the machined face and grooves really do help stop the ball quickly on the greens. More precise contact on greenside chips is just one more area where the S57s scores highly.

Being custom fitted is obviously the best option and Ping's European headquarters in Gainsborough, North Lincolnshire is one of the best in the business. Paying by the club is great too. As a mid-handicapper I loved using the mid and short S57 irons but was nowhere near as consistent with 5-and 6-iron and under, preferring the slightly more forgiving Ping i10 irons in 4-, 5- and 6-iron versions.

Having the option to mix and match your set is a great plus, and if you're already happy with your fairways, hybrids and wedges, buying only the irons you want - perhaps just -5 to 9-iron - makes perfect sense.

Purists might argue that the cast head is not as soft as forged, but in the Ping S57 iron you wont even notice the difference. The club looks great and for the better player is eminently workable, but Ping's real genius is making it playable for the 10-15 handicap golfer. At £105 a club buying S57 irons represents a serious investment, but if you want to feel and play better, then it's surely one worth making.