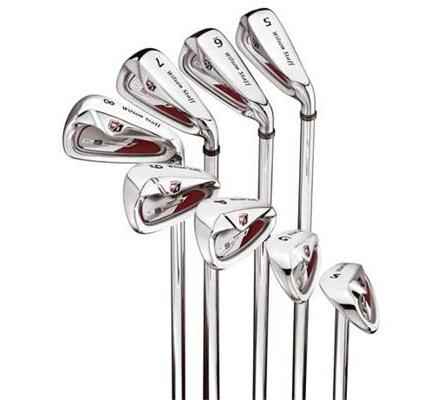 If the extreme levels of forgiveness are anything to go by, it's a welcome addition to Wilson's line up at a really competitive price point.

The Di7 has been a solid performer for Wilson in the mid-price iron market over the last couple of years, bringing the brand's famous Fat Shaft back into play, and offering high degrees of playability and forgiveness for a relatively modest outlay. Wilson is now hoping the Di9 will take up the baton to help it ride the crest of a Padraig Harrington-generated wave, hot on the heels of the Irishman's sublime exploits last summer.

Boasting the highest MOI of any iron from Wilson Staff, the Di9 has a slightly wider sole than its predecessor and a slightly lower-profile blade for even greater playability, especially at the longer end of the set. It has also been weighted so the sweet spot is more towards the toe, where the vast majority of amateur miss-hits are likely to occur. So if you buy a set you won't necessarily have to embark on that expensive series of lessons to iron out your ball-striking.

The 'Di' stands for Distance irons, and the Di9s certainly deliver, with the bulk of the cavity weight located directly behind the sweet spot for a really solid strike. A mid-to-high launch angle generates plenty of carry. The lightweight True Temper steel shafts I had in my review set help to improve swing speeds with less effort, and although the trademark thicker shaft won't be everyone's preference, its tapered design and slightly narrower width at the hosel end (0.450 inches), makes it look less clumsy at address than previous Fat Shaft models.

The Di9s are designed to be slightly less of a blunt instrument than the Di7s, and as such feature a mid-size head, rather than an oversized one, which will help improve accuracy, as well as offering a more visually-appealing clubhead for better players. While it's still very much a game improvement iron, the Di9s certainly wouldn't be out of place in a mid-handicapper's bag, offering confidence at address, while retaining the playability of a better player's iron.

Feel has been enhanced through the addition of a vibration-dampening 'shock trap' urethane insert, and that was certainly borne out on the driving range, with centre strikes barely registering up the shaft, while even slight miss-hits thankfully failed to send too many distress signals up to my somewhat cold hands.

Cosmetically, the Di9s look pretty classy and the high-gloss finish looks great fresh out of the bag.

Wilson also offers 7-club set (5-SW)for £299 with a charge of £50 for either an AW or Gap wedge. Personally, I'd probably want to dispense with 4-iron and the sand wedge, and opt for something with a little more refinement and precision to play from sand or from fluffy greenside lies. For example, a specialist Robert Mendralla-designed wedge or a 58-60 degree model might be preferred for better players.

For a club that was created with distance as the main focus, the Di9 irons sit beautifully at address and are surprisingly attractive. The mid-size heads instill confidence without being too bulky to look down on. The off-centre cavity and sweet spot design is a new concept and, if the extreme levels of forgiveness are anything to go by, it's a welcome addition to Wilson's line up at a really competitive price point.