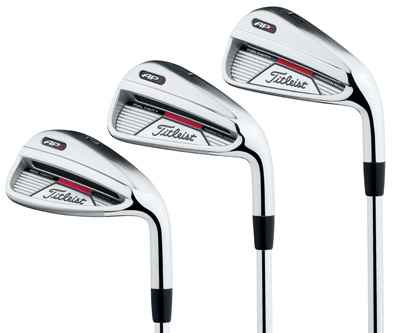 If you thought Titleists were beyond your game think again. These effortlessly combine that classic feel with new technology; the results, needless to say, are superb. A class act.

For generations of players, Titleist irons have traditionally been seen as the preserve of the skilled golfer, the seasoned amateur or the touring professional. The clubs were simple, not flashy; workable, not forgiving; powerful, not pretty. In short, they were everything the better player wanted.

But times change, and fortunately for the rest of us, Titleist has now moved with them, producing a set of irons that bear all the hallmarks of the brand yet at the same time are aimed squarely at the mid-handicapper. Thankfully, it was worth the wait.

Titleist launched the AP range last year, and when staff player Adam Scott used the better-player version - the AP2 - to shoot a devastating 61 en route to winning the Qatar Masters it became clear that this was a seriously good product. But for the average member of the golfing public - those that Titleist very respectfully call the 'aspiring' player - the AP1 is very much the focus of attention.

And from the first sight, it is clear that this is an iron to be reckoned with. They really do look like they mean business. With flashes of red complementing the contrasting polished and brushed silver finish, there is a lot going on compared to previous Titleists you might have experienced. But place the club behind the ball and all is calm - it sits neatly, the topline is reassuringly sturdy and the overall appearance is extremely appealing.

The technology that Titleist must have invested heavily in is nowhere to be seen, but that is the idea… it is still a Titleist after all. The tungsten nickel box laser-welded to the back and sole is beautifully wrapped in polished steel and topped off with an elastomer cushioning bar, leaving just a clean aluminium cavity plate on the top half of the iron.

Neither the cavity nor the insert is visible at address but rest assured they haven't gone AWOL; the former is busy pushing weight to the perimeter to increase forgiveness, while the latter is occupied with the unenviable task of lowering the centre of gravity to improve launch angles and give our aspirations a lift.

To that end, they are doing a sterling job and these irons are the easiest-to-hit Titleists you can imagine. They are also the longest, helped in no small part by the fact that the lofts in irons 3, 4 and 5 are one degree stronger than their AP2 equivalent, while the 6-PW are actually two degrees lower.

But with a lower Centre of Gravity and other technical touches like shorter hosels in the long irons (keeps more weight lower) the ball flight is officially medium to high. Put power and high launch together and you get one thing: serious distance. Add in the lovely Titleist feel (even though it's cast, not forged) and you've got a hit on your hands.

If you thought Titleists were beyond your game think again. These effortlessly combine that classic feel with 2009 technology; the results, needless to say, are superb. A class act.