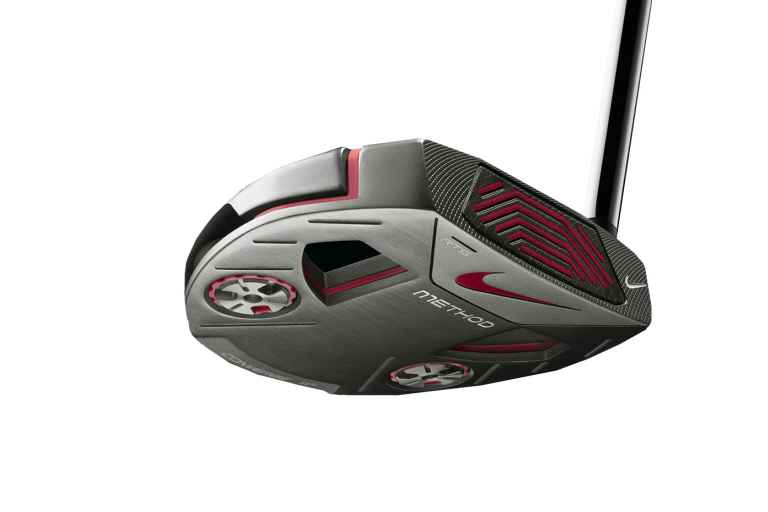 The theory is sound, but more impressively it actually works in practice.

Club manufacturers have had almost two years to come up with a product to combat 2016’s anchored putting ban, which comes into effect in January, and Nike has released its answer to the problem – CounterFlex technology.

The Swoosh has incorporated a 75-gram moveable weight in the grip of its Method Converge putters, and it can be adjusted on a 15-inch slide.

“Our research tells us that only 30 percent of golf athletes found his or her best match of rhythm and tempo when the weight was locked in the top of the slide, as is the case with most fixed mass counter-balanced putters. The remaining 70 percent played better when the 75 grams were located in the middle or bottom position,” explains David Franklin, Nike Master Modelmaker.

“With CounterFlex we have infinite positions for the weight so athletes can actually tune it to get their delivery and timing smoothed out and perfect at impact.”

By moving the weight, the moment of inertia and overall swing weight changes, allowing players to tailor the flat stick to their preference.

The theory is sound, but more impressively it actually works in practice. Unknowingly, the first time we used the putter the weight was in the top, and we felt it aided a pendulum-like stroke, but lessened the overall feel and control. Time to change it up.

To manoeuvre the weight into a different position, players simply unscrew the slide from the butt of the club, twist the middle of the weight to allow it to slide, and move it to the desired position. It’s a simple and effective process.

After moving the weight to a low setting, we had found our desired state. We felt there was still a high amount of MOI on offer, equaling confidence-inspiring forgiveness, and we could also control the putter head, leading to superb distance control.

There was a major difference after moving the weight, and our stroke was very different with the mass placed in different positions.

The Nike Method Converge S1-12 boasts a RZN layer between 304 Stainless Steel, which Nike says creates better dispersion, proven by robot testing, and we found from 10 feet the putter was deadly. Straight off the face we had the ball rolling end-over-end.

From five feet and in, we hardly missed, aided by the large “T” shaped alignment aid.

The RZN Groove Insert provides a soft, dampened feel, and it produces a muted sound. Because the feedback is somewhat softened by the feel, it's not the best distance putter on the market, but it is still solid from 25 feet and over.

The grip is soft and tacky, and the dots on the front allow players to hold the club at the same spot every time, aiding consistency.

The £150 price tag is great value for money, as you are getting a flat stick loaded with technology, which should lead to you holing more putts.

CounterFlex technology will suit players who want to tinker with the set-up of their putter. Changing the weight from top to bottom makes a sizeable difference to the performance of the flat stick.

The putter is deadly from close range, and boasts a soft feel.