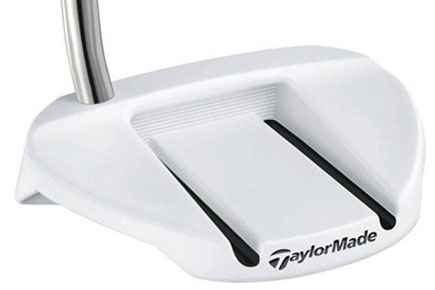 When TaylorMade first introduced its original Corza Ghost in 2010, it wasn’t just the putter’s face that turned a shade of white. In fact, I’m pretty sure I released a Scream on four different occasions.

Fast forward two years with TaylorMade’s brand new Ghost Manta in my hands – and having got over the fact that white really does aid alignment - I’m now fainting on the floor for an entirely new reason.

Forget about crazy gadgets and wing-like features, the Ghost Manta contrasts a simple mass appeal shape with ultimate performance, as proven in my round of 75 at De Vere Wokefield Park where I made 30 putts – several putts less than one of my typical rounds.

One of the best features of the Manta is that TaylorMade has taken 100g of tungsten in its aluminium body and put it far out on the heel and toe to heighten the club’s MOI. This ensures the head doesn’t twist or turn on miss hits, therefore creating tremendous stability and forgiveness for even an erratic putter like myself.

It also utilises a double-bend shaft to deliver offset without the shaft distracting from the putt.

As with all Ghost putters, the white finish is designed to help the golfer establish proper alignment. The large head, incorporating two black rails on the crown, really does frame those dimples and generates ultra confidence at address.

The Manta’s rich, durable finish also contrasts beautifully against the turf for improved visual reference. I could see the leading edge of the putter right the way through the stroke, which was more often than not pointing square to my target line.

While I wouldn’t say it’s the greatest feel putter I’ve ever laid my hands on, it more than does the job with TaylorMade’s Pure Roll insert, which helps impart a smooth and accurate roll.

And while its head weighs a stock weight of 370 grams, it doesn’t feel particularly heavy. If anything, I preferred the extra bit of weight as it helped maintain a stable rhythm through the stroke.

The Ghost Manta really does mean business. Focusing on stability and alignment slightly more than feel, the putter will certainly help you keep the ball locked on your target line. All in all, the Manta delivers a compelling package of features, performance and aesthetics.