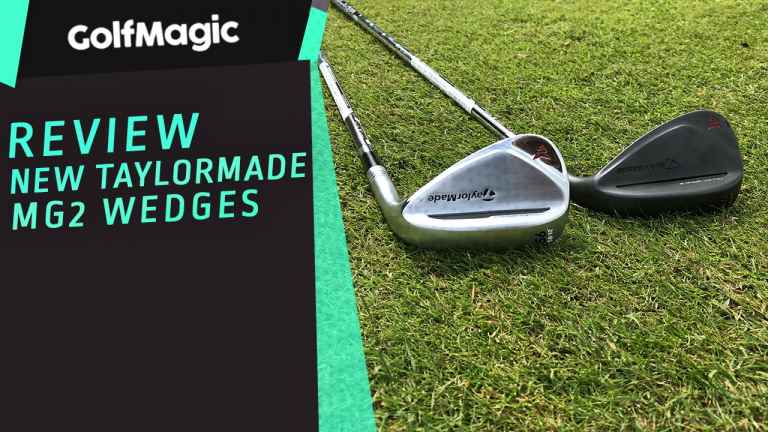 The Milled Grind wedge is one of the top performing wedges that TaylorMade has ever produced. Following its success, TaylorMade recently released the MG2 wedges that introduced a new raw face designed for optimal spin for precision wedge play. Check out the video below as GolfMagic's Jack Seddon test and reviews the MG2 wedges at Farleigh Golf Club.

Similar to its predecessor and also found in the new P·7TW irons is the company’s proven CNC milling technology, which allows for the production of wedges to exacting specifications; each leading edge and sole grind is individually CNC milled for unparalleled accuracy and consistency from club to club and grind to grind. This process faithfully reproduces the master design of the surfaces most impactful on the performance of the wedge.

Something unique to the MG2 wedges is the new raw face design, that doesn't start to develop until you remove the air-tight seal that covers the face. A raw face produces a more precise geometry to optimise spin and feel, while it also stops the sun from glaring off the club face.
ZTP Raw Grooves offer sharper, deeper and narrower grooves and a sharper radius, which further combined with a rougher surface from the laser etching between the grooves, enable the golfer to create more friction between the clubface and the ball generating more greenside spin.

I think that the MG2 wedges might be the best looking wedges that TaylorMade has ever produced. The combination of simplicity and elegance is unrivalled in the industry. The wedges look clean, modern and highly appealing over the ball. I wondered whether the raw face would ruin the clean look of the wedge but that's not the case, especially due to the fact that it's only across the groove area that rusts and not the entire face of the club.

Both colourways are fantastic, but for me personally the black finish just stands out amongst the crowd and looks like a serious and sexy golf club. I usually prefer a classic look on a wedge but the black MG2 completely changed my opinion and it's hands down one of the best looking wedges I've ever seen.

Not only do the MG2 wedges provide an incredible amount of spin, but it's consistent spin as well, which is possibly the most important factor to consider when buying a new wedge. If you hit three shots the same distance with a clean contact, the MG2 wedges provide such a consistent spin rate, making shot control a lot easier and a lot more repeatable.
The soft feel created by the raw finish is one of the best feels I've had with a wedge all year. I felt confident over small chips and really felt like I could work the wedge to play how I saw the shot.
Spin and feel aside, the Milled Grind 2 wedges are the most versatile wedges I've hit all year. The range of different shots they allow you to play provides you with absolute weapons around the greens. I played an array of different shots while testing the MG2's and I usually find with wedges that they allow you to play a certain shot better than others, but that's not the case with these badboys, they can do it all around the greens and to a level that I have never seen before in a wedge.

The best performing wedges of 2019. There have been some excellent contenders this year and I think 2019 has been one of the best years for wedges we have seen in a long time, but the MG2 should sit top of your wish list if you're in the market for a new wedge.

TaylorMade has hit the nail on the head in every aspect of these wedges, design, technology, performance, everything about the MG2 is first class.

If you're looking for a new wedge and want one that's going to provide you with ultimate spin control but also look fantastic, then you really need to look no further than the Milled Grind 2.