GolfMagic tests and reviews the Truss TB1 and Truss TB2 putters from TaylorMade. 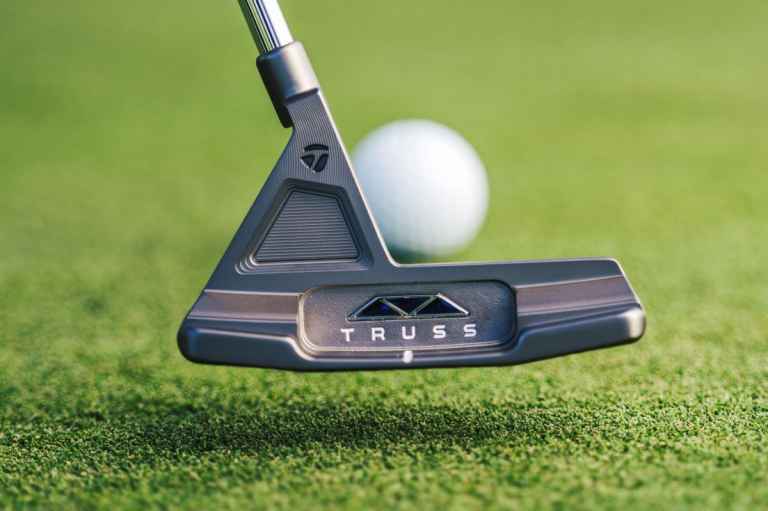 TaylorMade recently launched its Truss family of putters, designed to offer the performance of a high-MOI mallet but in a more traditional and preferred shape.

The distinctive look of Truss putters directly relates to the performance of the product. At address, the topline will look very familiar to golfers. However, the face-on view reveals a compelling hosel structure that’s the defining feature of the entire family.

The design creates multiple contact points on the topline and reduces the amount of unsupported mass, which is intended to improve the stability of the putter face at impact.
While traditionally shaped putters with a single contact point on the heel are susceptible to twisting at impact, Truss putters provide exceptional torsional stability and computer modeling shows Truss twisting less on off-centre strikes (as compared to our previous generation blade).

TaylorMade collected data on 40,000 putts hit by golfers of various skill levels and tracked the most common area of the face where strikes occur.

Results showed that more than half of the strikes occurred on the toe-side of centre, which causes deflection and can lead to offline putts.

Armed with this information, TaylorMade engineers set out to create a twist-resistant putter that offered greater torsional stability while maintaining a traditional shape.

Our engineers used the same design elements with our Truss putters, adding stronger horizontal support across the topline.

Having dual contact points on the topline provides greater integrity on strikes across the face, delivering the performance of a high-MOI putter with the look of a blade or traditional mallet.

We tested both the Truss TB1 (below) and TB2 (above) putters over a number of holes throughout a round, while also carrying a PING Anser blade putter to feel a comparison and it's safe to say the difference in feel and MOI was incredible.

Don't get me wrong, the PING Anser is one of the most iconic blade putters money can buy, but we were testing forgiveness and MOI, something that can frequently be forgot about when it comes to putters.

Just like with a driver, if you don't catch the ball out the middle with your putter, it's going to have a negative impact on your shot.

We tested the putters by using them in a number of different positions and distances, while we also tried to purposely miss-hit some putts to get a feel for how the technology works.

The unique shaping of the Truss hosel might be a lot to take in a first, but if you're someone struggling with your putting and you feel like you need more forgiveness, but you don't want the typical large shaped putter that comes with it, then you should seriously consider giving a Truss putter a go.

At address, the Truss hosel can't even be noticed and you will reap the benefits of the bridge-like shaping and the stability that comes with it.

When we purposely miss-hit the Truss putter, you can feel the strength and stability of the putter, which helps stop the putter from twisting at impact and therefore giving you straighter putts.

With the PING Anser putter, the miss-hit putts stay miss-hit, meaning that unless you've got very lucky then you're going to miss the putt.

The difference between the TB1 and TB2 as you can see is the position of the hosel, so if you're someone who prefers a centre-shaft putter then you're going to prefer to TB2, whereas if you've been playing with the more traditional style blade putter, TB1 could be the one for you.

The Truss putters are also available in two other options, TM1 and TM2, which have a slightly more mallet feel with a fang-shaped back.

If the look of the Truss putters are putting you off but you're struggling with your putts then don't be a fool, improving your putting should be the priority, not the design, so give them a try!